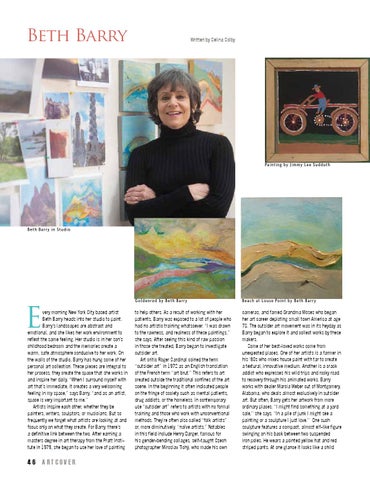 B et h Barry in Studio

very morning New York City based artist Beth Barry heads into her studio to paint. Barry’s landscapes are abstract and emotional, and she likes her work environment to reflect the same feeling. Her studio is in her son’s childhood bedroom and the memories create a warm, safe atmosphere conducive to her work. On the walls of the studio, Barry has hung some of her personal art collection. These pieces are integral to her process, they create the space that she works in and inspire her daily. “When I surround myself with art that’s immediate, it creates a very welcoming feeling in my space,” says Barry, “and as an artist, space is very important to me.” Artists inspire each other, whether they be painters, writers, sculptors, or musicians. But so frequently we forget what artists are looking at and focus only on what they create. For Barry, there’s a definitive link between the two. After earning a masters degree in art therapy from the Pratt Institute in 1979, she began to use her love of painting

to help others. As a result of working with her patients, Barry was exposed to a lot of people who had no artistic training whatsoever. “I was drawn to the rawness, and realness of these paintings,” she says. After seeing this kind of raw passion in those she treated, Barry began to investigate outsider art. Art critic Roger Cardinal coined the term “outsider art” in 1972 as an English translation of the French term “art brut.” This refers to art created outside the traditional confines of the art scene. In the beginning it often indicated people on the fringe of society such as mental patients, drug addicts, or the homeless. In contemporary use “outsider art” refers to artists with no formal training and those who work with unconventional methods. They’re often also called “folk artists” or, more diminutively, “naïve artists.” Notables in this field include Henry Darger, famous for his gender-bending collages, self-taught Czech photographer Miroslav Tichý, who made his own

cameras, and famed Grandma Moses who began her art career depicting small town America at age 78. The outsider art movement was in its heyday as Barry began to explore it and collect works by these makers. Some of her best-loved works come from unexpected places. One of her artists is a farmer in his ‘60s who mixes house paint with tar to create a textural, innovative medium. Another is a crack addict who expresses his wild trips and rocky road to recovery through his animated works. Barry works with dealer Marcia Weber out of Montgomery, Alabama, who deals almost exclusively in outsider art. But often, Barry gets her artwork from more ordinary places. “I might find something at a yard sale,” she says. “In a pile of junk I might see a painting or a sculpture I just love.” One such sculpture features a compact, almost elf-like figure swinging on his back between two suspended iron poles. He wears a pointed yellow hat and red striped pants. At one glance it looks like a child 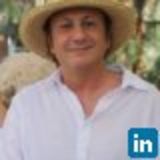