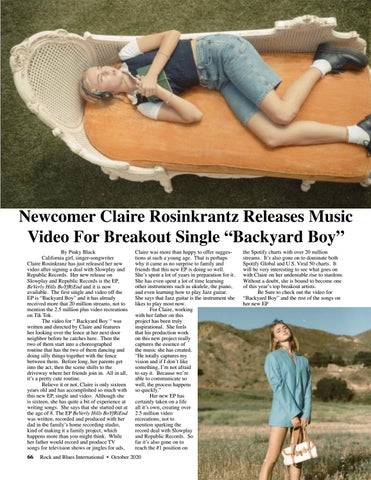 Newcomer Claire Rosinkrantz Releases Music Video For Breakout Single “Backyard Boy” By Pinky Black California girl, singer-songwriter Claire Rosinkranz has just released her new video after signing a deal with Slowplay and Republic Records. Her new release on Slowplay and Republic Records is the EP, BeVerly Hills BoYfRiEnd and it is now available. The first single and video off the EP is “Backyard Boy” and it has already received more that 20 million streams, not to mention the 2.5 million plus video recreations on Tik Tok. The video for “ Backyard Boy “ was written and directed by Claire and features her looking over the fence at her next door neighbor before he catches here. Then the two of them start into a choreographed routine that has the two of them dancing and doing silly things together with the fence between them. Before long, her parents get into the act, then the scene shifts to the driveway where her friends join in. All in all, it’s a pretty cute routine. Believe it or not, Claire is only sixteen years old and has accomplished so much with this new EP, single and video. Although she is sixteen, she has quite a bit of experience at writing songs. She says that she started out at the age of 8. The EP BeVerly Hills BoYfRiEnd was written, recorded and produced with her dad in the family’s home recording studio, kind of making it a family project, which happens more than you might think. While her father would record and produce TV songs for television shows or jingles for ads,

Claire was more than happy to offer suggestions at such a young age. That is perhaps why it came as no surprise to family and friends that this new EP is doing so well. She’s spent a lot of years in preparation for it. She has even spent a lot of time learning other instruments such as ukulele, the piano, and even learning how to play Jazz guitar. She says that Jazz guitar is the instrument she likes to play most now. For Claire, working with her father on this project has been truly inspirational. She feels that his production work on this new project really captures the essence of the music she has created. “He totally captures my vision and if I don’t like something, I’m not afraid to say it. Because we’re able to communicate so well, the process happens so quickly.” Her new EP has certainly taken on a life all it’s own, creating over 2.5 million video recreations, not to mention sparking the record deal with Slowplay and Republic Records. So far it’s also gone on to reach the #1 position on

the Spotify charts with over 20 million streams. It’s also gone on to dominate both Spotify Global and U.S. Viral 50 charts. It will be very interesting to see what goes on with Claire on her undeniable rise to stardom. Without a doubt, she is bound to become one of this year’s top breakout artists. Be Sure to check out the video for “Backyard Boy” and the rest of the songs on her new EP