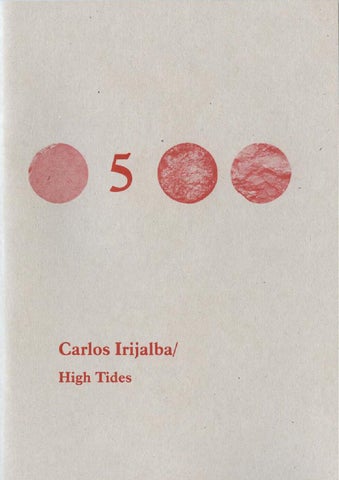 High Tides /Carlos Irijalba The World is already full and does not contain us. Saint Jerome.

One must go back some three centuries to the geological discovery of deep time, of the actual thickness of our planet, at the end of the 17th century, to pinpoint the origins of a change of paradigm, a leap in historical perspective from 6.000 years to 4.500 million years. That sudden expansion of history meant our physical confrontation with the mass of time. The discovery of time matter led to the birth of the relative, the questioning of the now, in relation to dimension and scale. This research focuses on Urdaibai, a territory located in the Basque Country, which was declared a Biosphere Reserve in 1984, an event that stands as a cut, a change of perspective for a specific domain. A thin superficial change in history, not in political or social but in geographical terms, a measurement of time where all interventions on a human scale are blurred and become, for the time being, the surface. The experience of that time turned relief, places temporal delimitations of geology, such as the Holocene[1], in relation with the Anthropocene[2], alongside contemporary time lapses closer to our scale such as the weather, seasons, urban planning and politics might be. [1] The last phase of the Quaternary Period that stretches from 11,700 years ago to the present day and coincides with the end of the last glaciation. [2] Term used to describe the present period in the Earthâ&amp;#x20AC;&amp;#x2122;s history since human activity had a significant global impact.

8 This project relies on natural and artificial processes for a parallel analysis of geological and social structures of development. For instance: how a process of sedimentation or mineral crystallisation can visually embody processes of maturation, evolution and social cohesion. Or conversely: how a volcanic composition with characteristic effervescent cavernous formations, developed rapidly over time (fast crystallisation), can suggest similarities on a formal plane with, say, a revolution. The title High Tides points to this relation between times, to the minimal but constant intervention of now, of the present and its representation. Lapses such as the lunar cycle or the tides, which more or less imperceptibly influence an existing medium depending on the perspective one has toward what is unfolding. High Tides consists on the relativision of structures and processes of evolution. States of matter are only partly solid or liquid, or prove to be generalisations about more complex states. The anthropocentric in its relation to territory suffers from a similar lack of perspective, or from what Virilio calls grey ecology. Both the 17th century cut and that of 1984 are notches in a space-time continuum of objective reality, and their connotations, be they positive or negative, will depend upon the readings or interventions that might be applied to them. Here we are handling the gap between both moments, from the entry of a new agent into the layer dynamics, until this agent (ourselves) becomes self-aware, as stratum and as critical space. Substance is what it is and accident what takes place.

9 Whether it is a strata cut or an apple falling, the accident lets us know about its substance, it unveils its qualities in relation with the time line. Something similar happens with us as accidents, as active agents that represent the beginning of a stratum with its own consciousness. In Urdaibai there is a possibility (though not the concrete fact) of human action as a constructive agent that is perhaps not additive, nor subtractive but fluctuating like the tides; and above all, self-aware. â&amp;#x20AC;&amp;#x153;Exoticism is everything that is otherâ&amp;#x20AC;?, said Victor Segalen. That other is simply beneath, it is the endotic. Tropical Euskadi is underneath; the place where our feet stand is at once volcano, reef, and submarine valley. What a new entry into this stratigraphic construction contains, as it is now, is the precise quality of not yet having been written. Urdaibai, 2012.

The Indifference of the Terrain and the Meeting of the Flows /Lars Bang Larsen High Tides is an investigation of the given, physical terrain. But this, in fact, is also how the work removes the ground beneath our feet, namely by replacing the reading of human history by the ineffable presence of geological deposits. A central element of the installation is the result of a geotechnical drilling that Irijalba undertook on the parking lot of the former weapon factory of Astra, one of the urban centres of Urdaibai. The drilling produced, to begin with, a thin layer of asphalt that makes for a top or a cap of the drilling, and perhaps can be said to designate the human presence as a surface phenomenon on the Earth. After the asphalt, other traces of construction were traversed, and later on (deeper down) limestone, until the drill hit Marga, a type of sedimentary rock, 17 metres into the ground. The tubes of mud and rock extracted from the ground have a certain cinematic quality that disagree with the sedentary notion of the â&amp;#x20AC;&amp;#x2DC;depositâ&amp;#x20AC;&amp;#x2122;: these sausages of matter make geology palpable as a flow that displaces anthropocentric time. It is as if they are film reels that can give back the dramatic movement to the terrain that the human perception otherwise only sees as static and superficially changing (with the seasons, the observable growth of trees and vegetation, etc.). High Tides is a work that is sceptical to human culture and hence to itself as art. In this sense the beholder may perceive the reality of the work as a boundary to the human: it is not certain what we are looking at.

22 Michel Foucault defines aesthetic experience as the transformation of one’s self by means of one’s own knowledge. In this sense we don’t have objects of knowledge; instead knowledge is always instrumental, a self-reflexive technology and a means to a kind of subjective perfection that can never be possessed by the subject. This is what art knows about knowledge, and knowledge proper is what art can never become. Fig.1 Anthropic residues in the soil of Gernika.

In High Tides, art dissolves knowledge in a radical and ideal beyond-self in the non-human condition of geology. This spells the return to the problematic of the sublime, understood in its original sense as nature’s violent forces and infinite dimensions that dwarf human reason and imagination. But in Irijalba’s case it is a sublime that first of all isn’t recognizable as the Erhabene (as Kant put it), as spiritualised loftiness. Instead, its formlessness is quite literally that of the mud beneath our feet, on which Irijalba insists as “an undefined element.”[1] Secondly, Irijalba’s geological sublime doesn’t flatter human reason in the way of the Kantian sublime. It is rather a cosmic sublime in which we can lose ourselves. According to the theorists our present historical epoch privileges space over time. This happens in the way that “space organises [1] In email to me, June 14 2012.

23 time in network society” (Castells), through the simultaneity and instantaneity of electronic media (McLuhan), or through the dominance of the spatial logic of the database (Manovich)[2]. This subordination of time to space produces a “space of flows” that displaces the familiar “space of places”; moreover (still according to Castells) this condition produces a “timeless time” that erodes cyclical time as well as the industrial clock. Interestingly, in High Tides we encounter another space of flows, but here it is not a question of flows of bits and digitised information, but of geological flows (magma, lava, minerals). Now what does this meeting of flows signify, as staged by the work? We can take note of the fact that there are many implicit references to Basque history in High Tides: the proximity to the traumatic site of Gernika; Urdaibai as a UNESCO Biosphere

[2] I am paraphrasing Steven Shaviro: Connected – or what it means to live in the network society. Minnesota University Press, Minneapolis 2003, p. 130.

24 Reserve (and hence a kind of primal Euskadi); a Franco era project to convert Urdaibai into a leisure area that Irijalba mentions in his research; and the place of the installation of High Tides, namely and old republican school now used for community meetings and parties. In the installation, an aluminium cast represents the territory in the form of a model reminiscent of a chrome-plated paper map. But the status of these historical referents is ambiguous. You could argue that they, by geological implication, are dryly deconstructed as identitarian referents. The soil and the minerals are singular to the site, but unspecific to any cultural construction. The notional materialisation of the essence (the marga,

the bedrock) is in fact indifferent to the culture that rests upon it. All the metaphors of rootedness and continuity with which cultural belonging and identity are conventionally constructed (the heartland, the soul of the nation, and so on) are insufficient to get to grips with culture as a phenomenon that plays out on the surface of time. Hence the drillings are not physical manifestations of the metaphor of depth, but instead the deconstruction of this metaphor into a quite different narrative, a different movement and evolution again, a kind of cinema, if you will.

25 The works that gave the title to High Tides are two photographs from the parking lot where the drilling was made, each depicting a large, thin tongue of concrete that looks like a frozen wave, and joins asphalt, mud and rock as significant states of matter in the work. Unlike human built space, the unformed flows of biomass, lava, minerals and debris are outside of the human scale and measure of time. Irijalba writes that “The project relies on natural and artificial processes for a parallel analysis of geological and social structures of development. For instance: how a process of sedimentation or mineral crystallisation can visually embody processes of maturation, evolution and social cohesion.”[3] In this endeavour he echoes theorists such as Manuel de Landa who also allow geological, organic, as well as micro-biological, linguistic and economic materials to have their say in the tracing of human history, along with the energies and intensities (pressures, temperatures) that work upon them and re-organise them. Thus de Landa sees the creation of cities (“urban morphogenesis,” as he calls it) as forms of self-organisation in which political and economic factors are dependant on “the intensification of non-human energy.” Accordingly, social evolution is just another form that the selforganisation of energy and flows may take: “…in a nonlinear world in which the same basic processes of self-organization take place in the mineral, organic, and cultural spheres, perhaps rocks hold some of the keys to understanding sedimentary humanity, igneous humanity, and all their mixtures.” [4] [3] Carlos Irijalba: „High Tides.“ Essay for the eponymous project, 2012. [4] Manuel de Landa: A Thousand Years of Nonlinear History. Zone Books, New York 1997, pp. 28 and 70.

26 Similarly, in High Tides we are given the chance to extract some of the secrets of the rocks and various states of matter. If contemporary culture negates duration and break down the rhythms associated with tradition and with life cycles, geology returns as a counter-narrative; as another space of flows that is open to becomings through velocities and materialisations that open up space and time again, and frees them up as distinct and complementary phenomena that may re-define human existence on the inside of the cosmos that is our historical space.

Graduated in Fine Arts at the Basque Country University, Bilbao.

Graduated at the Pamplona School of 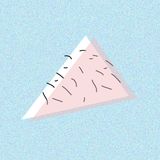