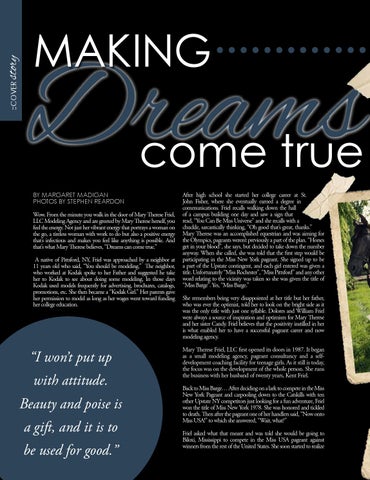 By Margaret Madigan Photos by Stephen Reardon Wow. From the minute you walk in the door of Mary Therese Friel, LLC Modeling Agency and are greeted by Mary Therese herself, you feel the energy. Not just her vibrant energy that portrays a woman on the go, a tireless woman with work to do but also a positive energy that’s infectious and makes you feel like anything is possible. And that’s what Mary Therese believes, “Dreams can come true.” A native of Pittsford, NY, Friel was approached by a neighbor at 11 years old who said, “You should be modeling.” The neighbor, who worked at Kodak spoke to her Father and suggested he take her to Kodak to see about doing some modeling. In those days Kodak used models frequently for advertising, brochures, catalogs, promotions, etc. She then became a “Kodak Girl.” Her parents gave her permission to model as long as her wages went toward funding her college education.

“I won’t put up with attitude. Beauty and poise is a gift, and it is to be used for good.”

After high school she started her college career at St. John Fisher, where she eventually earned a degree in communications. Friel recalls walking down the hall of a campus building one day and saw a sign that read, “You Can Be Miss Universe” and she recalls with a chuckle, sarcastically thinking, “Oh good that’s great, thanks.” Mary Therese was an accomplished equestrian and was aiming for the Olympics, pageants weren’t previously a part of the plan. “Horses get in your blood”, she says, but decided to take down the number anyway. When she called, she was told that the first step would be participating in the Miss New York pageant. She signed up to be a part of the Upstate contingent, and each girl entered was given a title. Unfortunately “Miss Rochester”, “Miss Pittsford” and any other word relating to the vicinity was taken so she was given the title of “Miss Barge”. Yes, “Miss Barge.” She remembers being very disappointed at her title but her father, who was ever the optimist, told her to look on the bright side as it was the only title with just one syllable. Dolores and William Friel were always a source of inspiration and optimism for Mary Therese and her sister Candy. Friel believes that the positivity instilled in her is what enabled her to have a successful pageant career and now modeling agency. Mary Therese Friel, LLC first opened its doors in 1987. It began as a small modeling agency, pageant consultancy and a selfdevelopment coaching facility for teenage girls. As it still is today, the focus was on the development of the whole person. She runs the business with her husband of twenty years, Kent Friel. Back to Miss Barge… After deciding on a lark to compete in the Miss New York Pageant and carpooling down to the Catskills with ten other Upstate NY competitors just looking for a fun adventure, Friel won the title of Miss New York 1978. She was honored and tickled to death. Then after the pageant one of her handlers said, “Now onto Miss USA!” to which she answered, “Wait, what?” Friel asked what that meant and was told she would be going to Biloxi, Mississippi to compete in the Miss USA pageant against winners from the rest of the United States. She soon started to realize

Fashion in Rochester is the focus of this month's issue. Our cover features Mary Therese Friel, former Miss New York, Miss USA and fashion model now owner of her own modeling agency. Read her story and all your favorite columns and features. 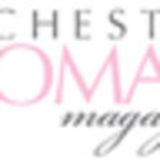