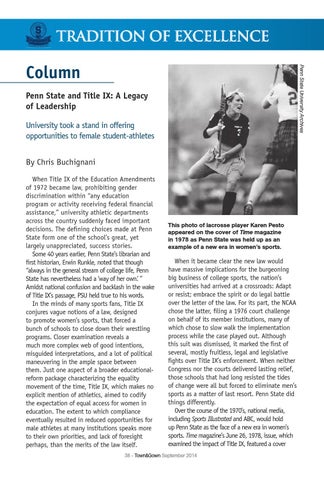 Column Penn State and Title IX: A Legacy of Leadership University took a stand in offering opportunities to female student-athletes By Chris Buchignani When Title IX of the Education Amendments of 1972 became law, prohibiting gender discrimination within “any education program or activity receiving federal financial assistance,” university athletic departments across the country suddenly faced important decisions. The defining choices made at Penn State form one of the school’s great, yet largely unappreciated, success stories. Some 40 years earlier, Penn State’s librarian and first historian, Erwin Runkle, noted that though “always in the general stream of college life, Penn State has nevertheless had a ‘way of her own.’ ” Amidst national confusion and backlash in the wake of Title IX’s passage, PSU held true to his words. In the minds of many sports fans, Title IX conjures vague notions of a law, designed to promote women’s sports, that forced a bunch of schools to close down their wrestling programs. Closer examination reveals a much more complex web of good intentions, misguided interpretations, and a lot of political maneuvering in the ample space between them. Just one aspect of a broader educationalreform package characterizing the equality movement of the time, Title IX, which makes no explicit mention of athletics, aimed to codify the expectation of equal access for women in education. The extent to which compliance eventually resulted in reduced opportunities for male athletes at many institutions speaks more to their own priorities, and lack of foresight perhaps, than the merits of the law itself.

This photo of lacrosse player Karen Pesto appeared on the cover of Time magazine in 1978 as Penn State was held up as an example of a new era in women’s sports.

When it became clear the new law would have massive implications for the burgeoning big business of college sports, the nation’s universities had arrived at a crossroads: Adapt or resist; embrace the spirit or do legal battle over the letter of the law. For its part, the NCAA chose the latter, filing a 1976 court challenge on behalf of its member institutions, many of which chose to slow walk the implementation process while the case played out. Although this suit was dismissed, it marked the first of several, mostly fruitless, legal and legislative fights over Title IX’s enforcement. When neither Congress nor the courts delivered lasting relief, those schools that had long resisted the tides of change were all but forced to eliminate men’s sports as a matter of last resort. Penn State did things differently. Over the course of the 1970’s, national media, including Sports Illustrated and ABC, would hold up Penn State as the face of a new era in women’s sports. Time magazine’s June 26, 1978, issue, which examined the impact of Title IX, featured a cover

Check out the online version of Town & Gown--A magazine about the people, places and events in and around State College and Penn State. If it's happening in Happy Valley...it's in Town & Gown…