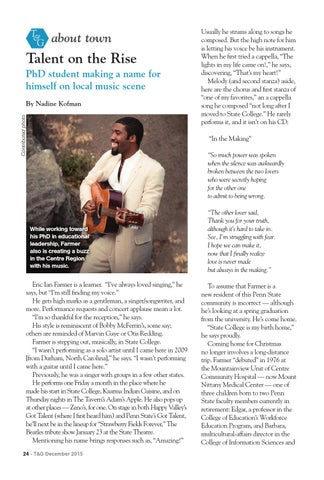 Usually he strums along to songs he composed. But the high note for him is letting his voice be his instrument. When he first tried a cappella, “The lights in my life came on!,” he says, discovering, “That’s my heart!” Melody (and second stanza) aside, here are the chorus and first stanza of “one of my favorites,” an a cappella song he composed “not long after I moved to State College.” He rarely performs it, and it isn’t on his CD: “In the Making” “So much power was spoken when the silence was awkwardly broken between the two lovers who were secretly hoping for the other one to admit to being wrong.

While working toward his PhD in educational leadership, Farmer also is creating a buzz in the Centre Region with his music.

Eric Ian Farmer is a learner. “I’ve always loved singing,” he says, but “I’m still finding my voice.” He gets high marks as a gentleman, a singer/songwriter, and more. Performance requests and concert applause mean a lot. “I’m so thankful for the reception,” he says. His style is reminiscent of Bobby McFerrin’s, some say; others are reminded of Marvin Gaye or Otis Redding. Farmer is stepping out, musically, in State College. “I wasn’t performing as a solo artist until I came here in 2009 [from Durham, North Carolina],” he says. “I wasn’t performing with a guitar until I came here.” Previously, he was a singer with groups in a few other states. He performs one Friday a month in the place where he made his start in State College, Kaarma Indian Cuisine, and on Thursday nights in The Tavern’s Adam’s Apple. He also pops up at other places — Zeno’s, for one. On stage in both Happy Valley’s Got Talent (where I first heard him) and Penn State’s Got Talent, he’ll next be in the lineup for “Strawberry Fields Forever,” The Beatles tribute show January 23 at the State Theatre. Mentioning his name brings responses such as, “Amazing!” 24 - T&amp;G December 2015

“The other lover said, Thank you for your truth, although it’s hard to take in. See, I’m struggling with fear. I hope we can make it, now that I finally realize love is never made but always in the making.” To assume that Farmer is a new resident of this Penn State community is incorrect — although he’s looking at a spring graduation from the university. He’s come home. “State College is my birth home,” he says proudly. Coming home for Christmas no longer involves a long-distance trip. Farmer “debuted” in 1976 at the Mountainview Unit of Centre Community Hospital — now Mount Nittany Medical Center — one of three children born to two Penn State faculty members currently in retirement: Edgar, a professor in the College of Education’s Workforce Education Program, and Barbara, multicultural-affairs director in the College of Information Sciences and

Celebrating our 50th year! Check out the online version of Town & Gown--A magazine about the people, places and events in and around State College and Penn State. If it's happening in Happy Valley...it's in Town & Gown… townandgown.com