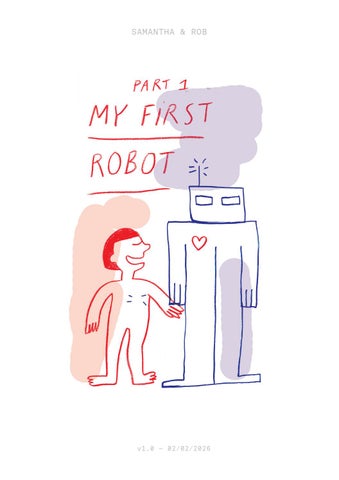 Your first robot? Congratulations! When I got my first robot it was years before you were even born. That was back in 2015. Robots can be intimidating at first but donâ&amp;#x20AC;&amp;#x2122;t worry, they don&#39;t bite (unless...). Besides, your parents and I will help you get to know them better â&amp;#x20AC;&amp;#x201C; they are lovable little and sometimes huge fellows afterall. In this book, I will explain to you how robots behave and learn from the world around us. Robots have a rich history, but an even more interesting future. As you read along, you will appeciate how they have shaped your past and come to understand how they will affect your future. Now start reading - You&#39;re on your way to becoming a real robo-wrangler!

In the early days of robotics, a man called Isaac Asimov wondered how robots would live together with us. He was concerned that mean people would use them to do bad things. So he invented three rules every robot has to follow: “The Three Laws Of Robotics”. They make sure that robots will never do anything evil – they will never harm you, your parents, your friends or are anybody else.

This booklet is part of a project investigating how children in the near future will grow up as “robotic natives”. It focusses on the prediction that robots will increasingly become a part of our homes – as helpful tools, playful toys or even friends. The booklet is one of four objects describing the consequences of a future streaked by robots. The other objects and project details can be found at philippschmitt.com/ projects/robotic-natives.

I compiled this booklet to introduce my little one to robotics. I felt there was no proper material available for what will be an important technology in her future.