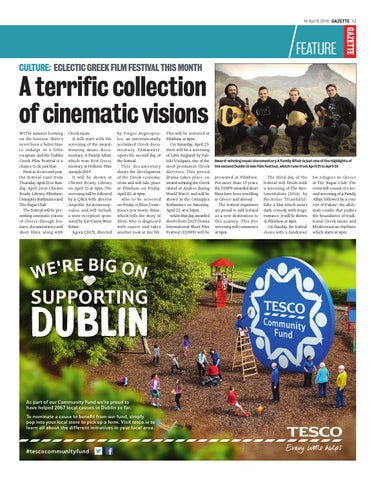 A terrific collection of cinematic visions WITH summer looming on the horizon, thereâ&amp;#x20AC;&amp;#x2122;s never been a better time to indulge in a little escapism, and the Dublin Greek Film Festival is a chance to do just that. Now in its second year, the festival runs from Thursday, April 21 to Sunday, April 24 at Chester Beatty Library, Filmbase, Omniplex Rathmines and The Sugar Club. The festival will be presenting cinematic visions of Greece through features, documentaries and short films, along with

Greek music. It will start with the screening of the awardwinning music documentary, A Family Affair, which won Best Documentary at Hellenic Film Awards 2015. It will be shown at Chester Beatty Library on April 21 at 6pm. The screening will be followed by a Q&amp;A with director Angeliki Aristomenopoulou, and will include a wine reception sponsored by Kir-Yianni Wine Estate. Agora (2015), directed

by Yorgos Avgeropoulos, an internationally acclaimed Greek documentar y filmmaker, opens the second day of the festival. T his documentar y shows the development of the Greek economic crisis and will take place at Filmbase on Friday, April 22, at 6pm. Also to be screened on Friday is Elias Demetriouâ&amp;#x20AC;&amp;#x2122;s new movie, Smac, which tells the story of Eleni, who is diagnosed with cancer and takes another look at her life.

This will be screened at Filmbase at 8pm. On Saturday, April 23, there will be a screening of Little England, by Pantelis Voulgaris, one of the most prominent Greek directors. This period drama takes place on award-winning the Greek island of Andros during World War II, and will be shown at the Omniplex Rathmines on Saturday, April 23, at 4.30pm. wAlso that day, awarded shorts from 2015 Drama International Short Film Festival (DISFF) will be

Award-winning music documentary A Family Affair is just one of the highlights of the second Dublin Greek Film Festival, which runs from April 21 to April 24

presented at Filmbase. For more than 15 years, the DISFF-awarded short films have been travelling in Greece and abroad. The festival organisers are proud to add Ireland as a new destination to this journey. This free screening will commence at 6pm.

The third day of the festival will finish with a screening of The Sentimentalists (2014), by Nicholas Triandafyllidis, a film which mixes dark comedy with tragic romance. It will be shown at Filmbase at 8pm. On Sunday, the festival closes with a fundraiser

for refugees in Greece at The Sugar Club. The event will consist of a second screening of A Family Affair, followed by a concert of Pakaw!, the all-female combo that pushes the boundaries of traditional Greek music and Mediterranean rhythms, which starts at 4pm.