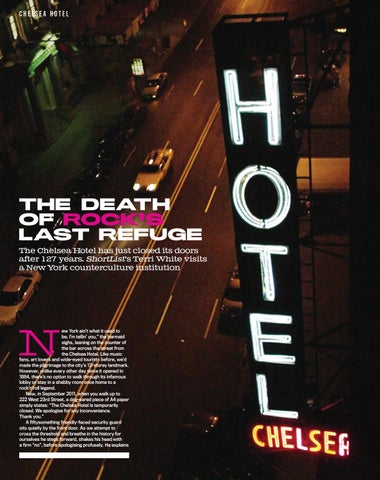 ew York ain’t what it used to be, I’m tellin’ you,” the barmaid sighs, leaning on the counter of the bar across the street from the Chelsea Hotel. Like music fans, art lovers and wide-eyed tourists before, we’d made the pilgrimage to the city’s 12-storey landmark. However, unlike every other day since it opened in 1884, there’s no option to walk through its infamous lobby or stay in a shabby room once home to a rock’n’roll legend. Now, in September 2011, when you walk up to 222 West 23rd Street, a dog-eared piece of A4 paper simply states: “The Chelsea Hotel is temporarily closed. We apologise for any inconvenience. Thank you.” A fiftysomething friendly-faced security guard sits quietly by the front door. As we attempt to cross the threshold and breathe in the history for ourselves he steps forward, shakes his head with a firm “no”, before apologising profusely. He explains

but died of a heroin overdose four months later before he could stand trial.

“AT 4AM, YOU CAN BRING BACK FOUR LADIES AND A BEAR, AND NO ONE CARES”

that he’s under “strict instructions” not to let anyone in. “Anyway,” he says, “there’s not much to see now.” Indeed, the lobby — once crammed with art, often hanging down to knock unsuspecting guests on the head — is now bare, with light fittings dangling from the wall. And so we head to the bar across the street, content for now to sit within its imposing shadow. The barmaid proclaims: “The problem is, the rich have taken over New York.” 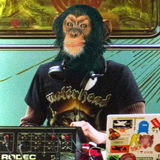