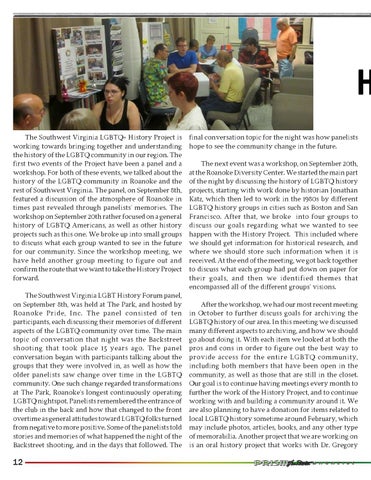 H The Southwest Virginia LGBTQ+ History Project is working towards bringing together and understanding the history of the LGBTQ community in our region. The first two events of the Project have been a panel and a workshop. For both of these events, we talked about the history of the LGBTQ community in Roanoke and the rest of Southwest Virginia. The panel, on September 8th, featured a discussion of the atmosphere of Roanoke in times past revealed through panelists’ memories. The workshop on September 20th rather focused on a general history of LGBTQ Americans, as well as other history projects such as this one. We broke up into small groups to discuss what each group wanted to see in the future for our community. Since the workshop meeting, we have held another group meeting to figure out and confirm the route that we want to take the History Project forward. The Southwest Virginia LGBT History Forum panel, on September 8th, was held at The Park, and hosted by Roanoke Pride, Inc. The panel consisted of ten participants, each discussing their memories of different aspects of the LGBTQ community over time. The main topic of conversation that night was the Backstreet shooting that took place 15 years ago. The panel conversation began with participants talking about the groups that they were involved in, as well as how the older panelists saw change over time in the LGBTQ community. One such change regarded transformations at The Park, Roanoke’s longest continuously operating LGBTQ nightspot. Panelists remembered the entrance of the club in the back and how that changed to the front overtime as general attitudes toward LGBTQ folks turned from negative to more positive. Some of the panelists told stories and memories of what happened the night of the Backstreet shooting, and in the days that followed. The

final conversation topic for the night was how panelists hope to see the community change in the future. The next event was a workshop, on September 20th, at the Roanoke Diversity Center. We started the main part of the night by discussing the history of LGBTQ history projects, starting with work done by historian Jonathan Katz, which then led to work in the 1980s by different LGBTQ history groups in cities such as Boston and San Francisco. After that, we broke into four groups to discuss our goals regarding what we wanted to see happen with the History Project. This included where we should get information for historical research, and where we should store such information when it is received. At the end of the meeting, we got back together to discuss what each group had put down on paper for their goals, and then we identified themes that encompassed all of the different groups’ visions. After the workshop, we had our most recent meeting in October to further discuss goals for archiving the LGBTQ history of our area. In this meeting we discussed many different aspects to archiving, and how we should go about doing it. With each item we looked at both the pros and cons in order to figure out the best way to provide access for the entire LGBTQ community, including both members that have been open in the community, as well as those that are still in the closet. Our goal is to continue having meetings every month to further the work of the History Project, and to continue working with and building a community around it. We are also planning to have a donation for items related to local LGBTQ history sometime around February, which may include photos, articles, books, and any other type of memorabilia. Another project that we are working on is an oral history project that works with Dr. Gregory 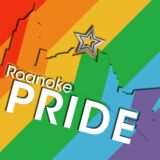