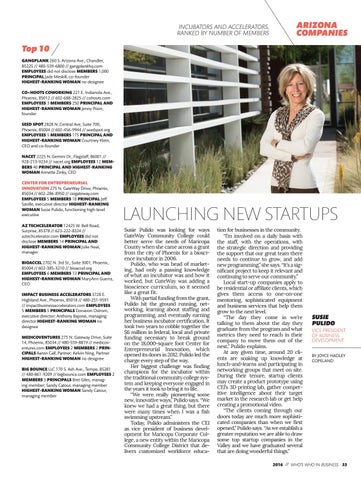 INCUBATORS AND ACCELERATORS, RANKED BY NUMBER OF MEMBERS

LAUNCHING NEW STARTUPS Susie Pulido was looking for ways GateWay Community College could better serve the needs of Maricopa County when she came across a grant from the city of Phoenix for a bioscience incubator in 2006. Pulido, who was head of marketing, had only a passing knowledge of what an incubator was and how it worked, but GateWay was adding a bioscience curriculum, so it seemed like a great fit. With partial funding from the grant, Pulido hit the ground running, networking, learning about staffing and programming, and eventually earning her business incubator certification. It took two years to cobble together the $6 million in federal, local and private funding necessary to break ground on the 18,000-square foot Center for Entrepreneurial Innovation, which opened its doors in 2012. Pulido led the charge every step of the way. Her biggest challenge was finding champions for the incubator within the traditional community college system and keeping everyone engaged in the years it took to bring it to life. “We were really pioneering some new, innovative ways,” Pulido says. “We knew we had a great thing, but there were many times when I was a fish swimming upstream.” Today, Pulido administers the CEI as vice president of business development for Maricopa Corporate College, a new entity within the Maricopa Community College District that delivers customized workforce educa-

tion for businesses in the community. “I’m involved on a daily basis with the staff, with the operations, with the strategic direction and providing the support that our great team there needs to continue to grow, and add new programming,” she says. “It’s a significant project to keep it relevant and continuing to serve our community.” Local start-up companies apply to be residential or affiliate clients, which gives them access to one-on-one mentoring, sophisticated equipment and business services that help them grow to the next level. “The day they come in we’re talking to them about the day they graduate from the program and what metrics they need to reach in their company to move them out of the nest,” Pulido explains. At any given time, around 20 clients are soaking up knowledge at lunch-and-learns and participating in networking groups that meet on site. During their tenure, startup clients may create a product prototype using CEI’s 3D printing lab, gather competitive intelligence about their target market in the research lab or get help creating a promotional video. “The clients coming through our doors today are much more sophisticated companies than when we first opened,” Pulido says. “As we establish a greater reputation we are able to draw some top startup companies in the Valley and we have graduated several that are doing wonderful things.”

Your guide to Arizona business connections. A special publication of Republic Media. 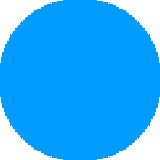