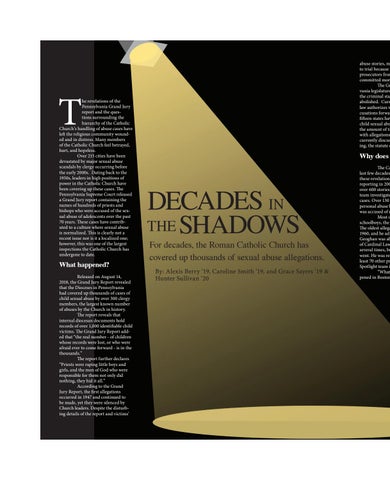 he revelations of the Pennsylvania Grand Jury report and the questions surrounding the hierarchy of the Catholic Church’s handling of abuse cases have left the religious community wounded and in distress. Many members of the Catholic Church feel betrayed, hurt, and hopeless. Over 215 cities have been devastated by major sexual abuse scandals by clergy occurring before the early 2000s. Dating back to the 1950s, leaders in high positions of power in the Catholic Church have been covering up these cases. The Pennsylvania Supreme Court released a Grand Jury report containing the names of hundreds of priests and bishops who were accused of the sexual abuse of adolescents over the past 70 years. These cases have contributed to a culture where sexual abuse is normalized. This is clearly not a recent issue nor is it a localized one; however, this was one of the largest inspections the Catholic Church has undergone to date.

What happened? Released on August 14, 2018, the Grand Jury Report revealed that the Dioceses in Pennsylvania had covered up thousands of cases of child sexual abuse by over 300 clergy members, the largest known number of abuses by the Church in history. The report reveals that internal diocesan documents hold records of over 1,000 identifiable child victims. The Grand Jury Report added that “the real number - of children whose records were lost, or who were afraid ever to come forward - is in the thousands.” The report further declares “Priests were raping little boys and girls, and the men of God who were responsible for them not only did nothing, they hid it all.” According to the Grand Jury Report, the first allegations occurred in 1947 and continued to be made, yet they were silenced by Church leaders. Despite the disturbing details of the report and victims’

DECADES IN THE SHADOWS

The Ca last few decades these revelations reporting in 200 over 600 stories team investigate cases. Over 130 personal abuse b was accused of r Most o schoolboys, the The oldest allega 1960, and he adm Geoghan was ab of Cardinal Law several times, bu went. He was rem least 70 other pr Spotlight team i “What pened in Boston 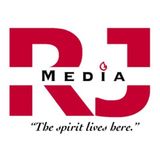 “Just play. Have fun. Enjoy the game.” Grace Weigand, a sopho- more, is considered a rarity in the Regis Jesuit sports community as a three sport varsity athlete playing field hockey, lacrosse, and bas- ketball. She came in with a fiery competitiveness that could not be extinguished by anyone in her path.