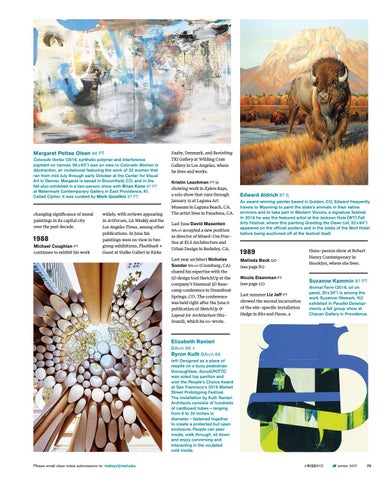 Margaret Pettee Olsen 86 PT Colorado Vortex (2016, synthetic polymer and interference pigment on canvas, 96 x 60") was on view in Colorado Women in Abstraction, an invitational featuring the work of 32 women that ran from mid July through early October at the Center for Visual Art in Denver. Margaret is based in Broomfield, CO, and in the fall also exhibited in a two-person show with Brian Kane 87 PT at Watermark Contemporary Gallery in East Providence, RI. Called Cipher, it was curated by Mark Goodkin 87 PT.

changing significance of mural paintings in its capital city over the past decade.

widely, with reviews appearing in ArtForum, LA Weekly and the Los Angeles Times, among other publications. In June his paintings were on view in two group exhibitions, Flashback + Guest at Stalke Galleri in Kirke

Edward Aldrich 87 IL An award-winning painter based in Golden, CO, Edward frequently travels to Wyoming to paint the state’s animals in their native environs and to take part in Western Visions, a signature festival. In 2016 he was the featured artist at the Jackson Hole [WY] Fall Arts Festival, where this painting Greeting the Dawn (oil, 52 x 64") appeared on the official posters and in the lobby of the Wort Hotel before being auctioned off at the festival itself.

three-person show at Robert Henry Contemporary in Brooklyn, where she lives.

Byron Kuth BArch 86 left: Designed as a place of respite on a busy pedestrian thoroughfare, SonoGROTTO was voted top pavilion and won the People’s Choice Award at San Francisco’s 2016 Market Street Prototyping Festival. The installation by Kuth Ranieri Architects consists of hundreds of cardboard tubes — ranging from 6 to 24 inches in diameter — fastened together to create a protected but open enclosure. People can peer inside, walk through, sit down and enjoy conversing and interacting in the sculpted void inside. Please email class notes submissions to: risdxyz@risd.edu.