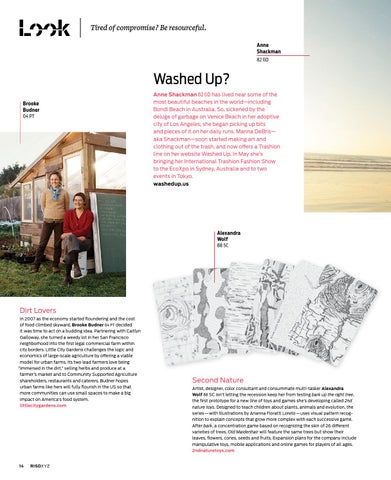 Anne Shackman 82 GD has lived near some of the most beautiful beaches in the world—including Bondi Beach in Australia. So, sickened by the deluge of garbage on Venice Beach in her adoptive city of Los Angeles, she began picking up bits and pieces of it on her daily runs. Marina DeBris— aka Shackman—soon started making art and clothing out of the trash, and now offers a Trashion line on her website Washed Up. In May she’s bringing her International Trashion Fashion Show to the EcoXpo in Sydney, Australia and to two events in Tokyo. washedup.us

Dirt Lovers In 2007 as the economy started floundering and the cost of food climbed skyward, Brooke Budner 04 PT decided it was time to act on a budding idea. Partnering with Caitlyn Galloway, she turned a weedy lot in her San Francisco neighborhood into the first legal commercial farm within city borders. Little City Gardens challenges the logic and economics of large-scale agriculture by offering a viable model for urban farms. Its two lead farmers love being “immersed in the dirt,” selling herbs and produce at a farmer’s market and to Community Supported Agriculture shareholders, restaurants and caterers. Budner hopes urban farms like hers will fully flourish in the US so that more communities can use small spaces to make a big impact on America’s food system. littlecitygardens.com

Second Nature Artist, designer, color consultant and consummate multi-tasker Alexandra Wolf 88 SC isn’t letting the recession keep her from testing bark up the right tree, the first prototype for a new line of toys and games she’s developing called 2nd nature toys. Designed to teach children about plants, animals and evolution, the series — with illustrations by Arianna Fioratti Loreto — uses visual pattern recognition to explain concepts that grow more complex with each successive game. After bark, a concentration game based on recognizing the skin of 26 different varieties of trees, Old Maidenhair will feature the same trees but show their leaves, flowers, cones, seeds and fruits. Expansion plans for the company include manipulative toys, mobile applications and online games for players of all ages. 2ndnaturetoys.com 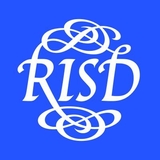