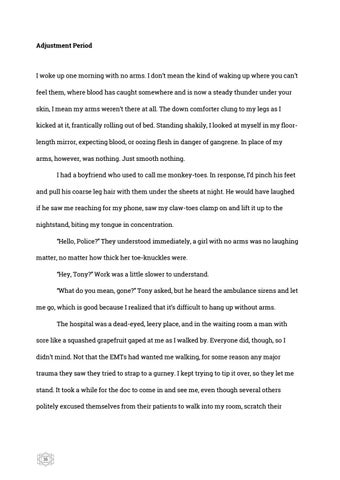 I woke up one morning with no arms. I don’t mean the kind of waking up where you can’t feel them, where blood has caught somewhere and is now a steady thunder under your skin, I mean my arms weren’t there at all. The down comforter clung to my legs as I kicked at it, frantically rolling out of bed. Standing shakily, I looked at myself in my floorlength mirror, expecting blood, or oozing flesh in danger of gangrene. In place of my arms, however, was nothing. Just smooth nothing. I had a boyfriend who used to call me monkey-toes. In response, I’d pinch his feet and pull his coarse leg hair with them under the sheets at night. He would have laughed if he saw me reaching for my phone, saw my claw-toes clamp on and lift it up to the nightstand, biting my tongue in concentration. “Hello, Police?” They understood immediately, a girl with no arms was no laughing matter, no matter how thick her toe-knuckles were. “Hey, Tony?” Work was a little slower to understand. “What do you mean, gone?” Tony asked, but he heard the ambulance sirens and let me go, which is good because I realized that it’s difficult to hang up without arms. The hospital was a dead-eyed, leery place, and in the waiting room a man with sore like a squashed grapefruit gaped at me as I walked by. Everyone did, though, so I didn’t mind. Not that the EMTs had wanted me walking, for some reason any major trauma they saw they tried to strap to a gurney. I kept trying to tip it over, so they let me stand. It took a while for the doc to come in and see me, even though several others politely excused themselves from their patients to walk into my room, scratch their