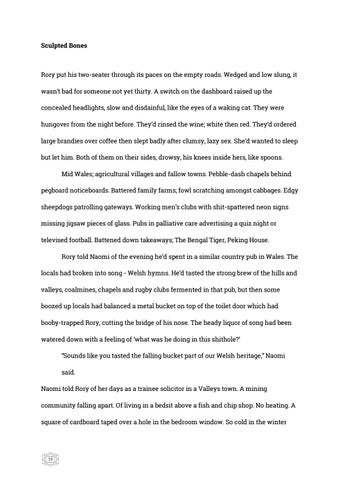 Rory put his two-seater through its paces on the empty roads. Wedged and low slung, it wasn’t bad for someone not yet thirty. A switch on the dashboard raised up the concealed headlights, slow and disdainful, like the eyes of a waking cat. They were hungover from the night before. They’d rinsed the wine; white then red. They’d ordered large brandies over coffee then slept badly after clumsy, lazy sex. She’d wanted to sleep but let him. Both of them on their sides, drowsy, his knees inside hers, like spoons. Mid Wales; agricultural villages and fallow towns. Pebble-dash chapels behind pegboard noticeboards. Battered family farms; fowl scratching amongst cabbages. Edgy sheepdogs patrolling gateways. Working men’s clubs with shit-spattered neon signs missing jigsaw pieces of glass. Pubs in palliative care advertising a quiz night or televised football. Battened down takeaways; The Bengal Tiger, Peking House. Rory told Naomi of the evening he’d spent in a similar country pub in Wales. The locals had broken into song - Welsh hymns. He’d tasted the strong brew of the hills and valleys, coalmines, chapels and rugby clubs fermented in that pub, but then some boozed up locals had balanced a metal bucket on top of the toilet door which had booby-trapped Rory, cutting the bridge of his nose. The heady liquor of song had been watered down with a feeling of ‘what was he doing in this shithole?’ “Sounds like you tasted the falling bucket part of our Welsh heritage,” Naomi said. Naomi told Rory of her days as a trainee solicitor in a Valleys town. A mining community falling apart. Of living in a bedsit above a fish and chip shop. No heating. A square of cardboard taped over a hole in the bedroom window. So cold in the winter