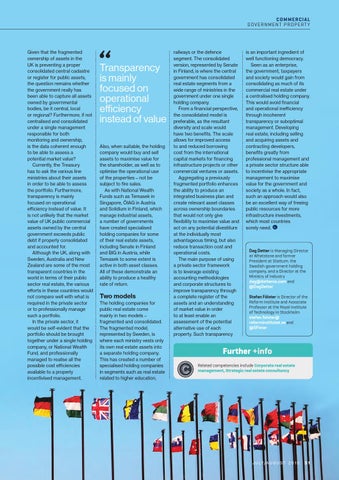 Given that the fragmented ownership of assets in the UK is preventing a proper consolidated central cadastre or register for public assets, the question remains whether the government really has been able to capture all assets owned by governmental bodies, be it central, local or regional? Furthermore, if not centralised and consolidated under a single management responsible for both monitoring and ownership, is the data coherent enough to be able to assess a potential market value? Currently, the Treasury has to ask the various line ministries about their assets in order to be able to assess the portfolio. Furthermore, transparency is mainly focused on operational efficiency instead of value. It is not unlikely that the market value of UK public commercial assets owned by the central government exceeds public debt if properly consolidated and accounted for. Although the UK, along with Sweden, Australia and New Zealand are some of the most transparent countries in the world in terms of their public sector real estate, the various efforts in these countries would not compare well with what is required in the private sector or to professionally manage such a portfolio. In the private sector, it would be self-evident that the portfolio should be brought together under a single holding company, or National Wealth Fund, and professionally managed to realise all the possible cost efficiencies available to a properly incentivised management.

Transparency is mainly focused on operational efficiency instead of value Also, when suitable, the holding company would buy and sell assets to maximise value for the shareholder, as well as to optimise the operational use of the properties – not be subject to fire sales. As with National Wealth Funds such as Temasek in Singapore, ÖIAG in Austria and Solidium in Finland, which manage industrial assets, a number of governments have created specialised holding companies for some of their real estate assets, including Senate in Finland and BIG in Austria, while Temasek to some extent is active in both asset classes. All of these demonstrate an ability to produce a healthy rate of return.

railways or the defence segment. The consolidated version, represented by Senate in Finland, is where the central government has consolidated real estate segments from a wide range of ministries in the government under one single holding company. From a financial perspective, the consolidated model is preferable, as the resultant diversity and scale would have two benefits. The scale allows for improved access to and reduced borrowing cost from the international capital markets for financing infrastructure projects or other commercial ventures or assets. Aggregating a previously fragmented portfolio enhances the ability to produce an integrated business plan and create relevant asset classes across ownership boundaries that would not only give flexibility to maximise value and act on any potential divestiture at the individually most advantageous timing, but also reduce transaction cost and operational costs. The main purpose of using a private sector framework is to leverage existing accounting methodologies and corporate structures to improve transparency through a complete register of the assets and an understanding of market value in order to at least enable an assessment of the potential alternative use of each property. Such transparency

is an important ingredient of well functioning democracy. Seen as an enterprise, the government, taxpayers and society would gain from consolidating as much of its commercial real estate under a centralised holding company. This would avoid financial and operational inefficiency through incoherent transparency or suboptimal management. Developing real estate, including selling and acquiring assets and contracting developers, benefits greatly from professional management and a private sector structure able to incentivise the appropriate management to maximise value for the government and society as a whole. In fact, such an approach would also be an excellent way of freeing public resources for more infrastructure investments, which most countries sorely need. C

Dag Detter is Managing Director at Whetstone and former President at Stattum, the Swedish government holding company, and a Director at the Ministry of Industry dag@detterco.com and @DagDetter Stefan Fölster is Director of the Reform Institute and Associate Professor at the Royal Institute of Technology in Stockholm stefan.folster@ reforminstitutet.se and @SFlster

Drones have been causing a buzz for some time, so we’re pleased to present an article from experienced operators to explain what you need t...

Drones have been causing a buzz for some time, so we’re pleased to present an article from experienced operators to explain what you need t...