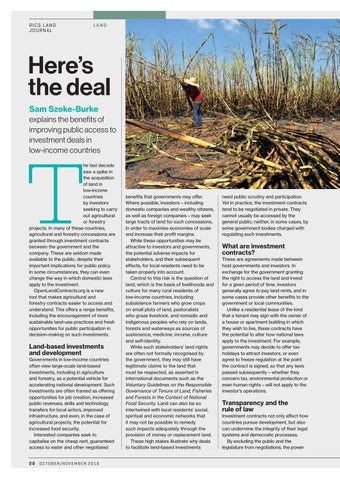 he last decade saw a spike in the acquisition of land in low-income countries by investors seeking to carry out agricultural or forestry projects. In many of these countries, agricultural and forestry concessions are granted through investment contracts between the government and the company. These are seldom made available to the public, despite their important implications for public policy. In some circumstances, they can even change the way in which domestic laws apply to the investment. OpenLandContracts.org is a new tool that makes agricultural and forestry contracts easier to access and understand. This offers a range benefits, including the encouragement of more sustainable land-use practices and fresh opportunities for public participation in decision-making on such investments.

Land-based investments and development Governments in low-income countries often view large-scale land-based investments, including in agriculture and forestry, as a potential vehicle for accelerating national development. Such investments are often framed as offering opportunities for job creation, increased public revenues, skills and technology transfers for local actors, improved infrastructure, and even, in the case of agricultural projects, the potential for increased food security. Interested companies seek to capitalise on the cheap rent, guaranteed access to water and other negotiated 20 OC TOBER/NOVEMBER 2016

benefits that governments may offer. Where possible, investors – including domestic companies and wealthy citizens, as well as foreign companies – may seek large tracts of land for such concessions, in order to maximise economies of scale and increase their profit margins. While these opportunities may be attractive to investors and governments, the potential adverse impacts for stakeholders, and their subsequent effects, for local residents need to be taken properly into account. Central to this risk is the question of land, which is the basis of livelihoods and culture for many rural residents of low-income countries, including subsistence farmers who grow crops on small plots of land, pastoralists who graze livestock, and nomadic and indigenous peoples who rely on lands, forests and waterways as sources of sustenance, medicine, income, culture and self-identity. While such stakeholders’ land rights are often not formally recognised by the government, they may still have legitimate claims to the land that must be respected, as asserted in international documents such as the Voluntary Guidelines on the Responsible Governance of Tenure of Land, Fisheries and Forests in the Context of National Food Security. Land can also be so intertwined with local residents’ social, spiritual and economic networks that it may not be possible to remedy such impacts adequately through the provision of money or replacement land. These high stakes illustrate why deals to facilitate land-based investments

need public scrutiny and participation. Yet in practice, the investment contracts tend to be negotiated in private. They cannot usually be accessed by the general public; neither, in some cases, by some government bodies charged with regulating such investments.

What are investment contracts? These are agreements made between host governments and investors. In exchange for the government granting the right to access the land and invest for a given period of time, investors generally agree to pay land rents, and in some cases provide other benefits to the government or local communities. Unlike a residential lease of the kind that a tenant may sign with the owner of a house or apartment building in which they wish to live, these contracts have the potential to alter how national laws apply to the investment. For example, governments may decide to offer tax holidays to attract investors, or even agree to freeze regulation at the point the contract is signed, so that any laws passed subsequently – whether they concern tax, environmental protection or even human rights – will not apply to the investor’s operations.

Transparency and the rule of law Investment contracts not only affect how countries pursue development, but also can undermine the integrity of their legal systems and democratic processes. By excluding the public and the legislature from negotiations, the power

Technology is affecting many aspects of surveying, offering new ways to look at and shape the world, and this issue covers a wide range of facilities – from modelling the London of the future to widening access to land investment contracts in low-income countries – as well as taking considering the impact of Scottish rural policy on field sports. 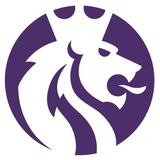