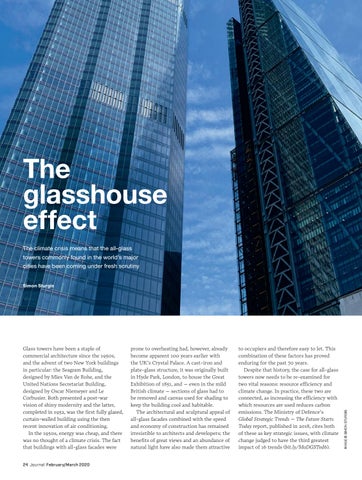 Glass towers have been a staple of commercial architecture since the 1950s, and the advent of two New York buildings in particular: the Seagram Building, designed by Mies Van de Rohe, and the United Nations Secretariat Building, designed by Oscar Niemeyer and Le Corbusier. Both presented a post-war vision of shiny modernity and the latter, completed in 1952, was the first fully glazed, curtain-walled building using the then recent innovation of air conditioning. In the 1950s, energy was cheap, and there was no thought of a climate crisis. The fact that buildings with all-glass facades were 24 Journal February/March 2020

prone to overheating had, however, already become apparent 100 years earlier with the UK’s Crystal Palace. A cast-iron and plate-glass structure, it was originally built in Hyde Park, London, to house the Great Exhibition of 1851, and – even in the mild British climate – sections of glass had to be removed and canvas used for shading to keep the building cool and habitable. The architectural and sculptural appeal of all-glass facades combined with the speed and economy of construction has remained irresistible to architects and developers; the benefits of great views and an abundance of natural light have also made them attractive

to occupiers and therefore easy to let. This combination of these factors has proved enduring for the past 70 years. Despite that history, the case for all-glass towers now needs to be re-examined for two vital reasons: resource efficiency and climate change. In practice, these two are connected, as increasing the efficiency with which resources are used reduces carbon emissions. The Ministry of Defence’s Global Strategic Trends – The Future Starts Today report, published in 2018, cites both of these as key strategic issues, with climate change judged to have the third greatest impact of 16 trends (bit.ly/MoDGSTed6).

Our focus this issue is to offer advice to those running SMEs – predominantly sole traders or smaller firms – and to those thinking of setti...

Our focus this issue is to offer advice to those running SMEs – predominantly sole traders or smaller firms – and to those thinking of setti...