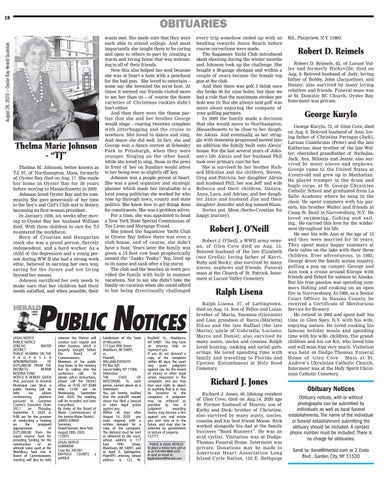 Thelma Marie Johnson - “TJ” Thelma M. Johnson, better known as TJ, 97, of Northampton, Mass, formerly of Oyster Bay, died on Aug. 17. She made her home in Oyster Bay for 50 years before moving to Massachusetts in 2009. Johnson loved Oyster Bay and its community. She gave generously of her time to the Boy’s and Girl’s Club and to Rotary, becoming its first woman president. In January 1959, six weeks after moving to Oyster Bay her husband William died. With three children to care for, TJ re-entered the workforce. Born of Croatian and Hungarian stock she was a proud person, fiercely independent, and a hard worker. As a child of the depression and a young person during WW II she had a strong work ethic, believed in earning her own way, saving for the future and not living beyond her means. Johnson sacrificed her own needs to make sure that her children had their needs satisfied, and when possible, their

wants met. She made sure that they were each able to attend college. And most importantly she taught them to be caring and open to others in part by creating a warm and loving home that was welcoming to all of their friends. Now this also helped her soul because she was at heart a ham with a penchant for the bad pun. She loved to entertain – some say she invented the term host. At times it seemed our friends visited more to see her than us – of course the dozen varieties of Christmas cookies didn’t hurt either. And then there were the theme parties that she and her brother George would stage – roaring twenties complete with jitterbugging and the cruise to nowhere. She loved to dance and sing. And dance she did well. In fact, she and George won a dance contest at Schenley Park in Pittsburgh, when they were younger. Singing on the other hand, while she loved to sing, those in the pews in front of her on Sundays would attest to her being ever so slightly off key. Johnson was a people person at heart. She was a good organizer and strategic planner which made her invaluable to a local young politician she worked for who rose up through town, county and state politics. She knew how to get things done for constituents. She was a problem solver. For a time, she was appointed to head a New York State Special Commission of Tax Liens and Mortgage Fraud. She joined the Sagamore Yacht Club in Oyster Bay before there was even a club house, and of course, she didn’t have a boat. Years later the family was given a 12 foot row boat prophetically named the “Leaky Teaky.” Yep, lived up to its name and sank after a big storm. The club and the beaches in town provided the family with built in summer vacations. Not to say she didn’t take the family on vacation when she could afford to but being directionally challenged

LEGAL NOTICE PUBLIC NOTICE JERICHO WATER DISTRICT PUBLIC HEARING ON THE P R O P O S E D APRORPRIATION OF $375,000.00 FROM THE DISTRICTS REPAIR RESERVE FUND NOTICE IS HEREBY GIVEN that, pursuant to General Municipal Law §6-d, a public hearing will be held via phone conferencing platform pursuant to Governor Cuomo’s Executive Order 202.1 on Thursday, September 3, 2020 at 9:00 am for the purpose of conducting a hearing on the proposed appropriation of $375,000.00 from the repair reserve fund for providing funding for the construction of an altitude valve vault at the Woodbury Tank site. A Board of Commissioners meeting will also be held

wherein the District will conduct such regular and other business which is properly brought before the Board of Commissioners. Members of the public may listen to the meeting live by calling into the conference call. To obtain call-in instructions, please call the District office at (516) 921-8280 after 12:00 pm on Wednesday, September 2nd, 2020. The meeting will be recorded and later transcribed. By Order of the Board of Water Commissioners of the Jericho Water District. JAMES ASMUS Secretary Dated:Syosset, New York August 28th, 2020 122875 LEGAL NOTICE SUMMONS Case No. 20CX61 BAYFIELD COUNTY, political

Subdivision of the State of Wisconsin 117 East Fifth Street Washburn, WI 54891, vs. Plaintiff, WILLIAM ESPOSITO PO Box 425 Locust Valley, NY 11560, Defendant. THE STATE OF WISCONSIN, To each person named above as a Defendant: You are hereby notified that the plaintiff named above has filed a lawsuit or other legal action against you. Within 40 days after August 14, 2020 you must respond with a written demand for a copy of the complaint. The demand must be sent or delivered to the court, whose address is 117 East Fifth Street, Washburn, WI 54891, and to April K. Splittgerber, Plaintiff’s attorney, whose address is 122 W.

Bayfield St., Washburn, WI 54891. You may have an attorney help or represent you. If you do not demand a copy of the complaint within 40 days, the court may grant judgment against you for the award of money or other legal action requested in the complaint, and you may lose your right to object to anything that is or may be incorrect in the complaint. A judgment may be enforced as provided by law. A judgment awarding money may become a lien against any real estate you own now or in the future, and may also be enforced by garnishment or seizure of property. 122711

every trip somehow ended up with us heading towards Jones Beach before course corrections were made. The Sagamore Yacht Club introduced skeet shooting during the winter months and Johnson took up the challenge. She bought a 20-gauge shotgun and within a couple of years became the female top gun at the club. And then there was golf. I think once she broke 90 for nine holes, but then we had a rule that the maximum strokes per hole was 10. But she always said golf was more about enjoying the company of your golfing partners. In 2009 the family made a decision that she would move to Northampton, Massachusetts to be close to her daughter Alexis. And eventually, as her struggle with dementia progressed moved into an addition the family built onto Alexis’ house. For the last several years of Johnson’s life Alexis and her husband Phil took over primary care for her. She is survived by her brother Richard Mikulan and his children, Steven, Greg and Patricia; her daughter Alexis and husband Phil; her son Jeff and wife Rebecca and their children, Danica, Anya, Luca, and Adrian; and her daughter Janis and husband Jim and their daughter Jennifer and dog named Blaze. Sretan put, Mom (Serbo-Croatian for happy journey).

Ralph Lisena Ralph Lisena, 37, of Lattingtown, died on Aug. 14. Son of Felice and Luisa; brother of Maria, Susanna (Giovanni) and Lisa; grandson of Rocco (Marietta) DiLeo and the late Raffael (the late Maria); uncle of Gabriella, Luciano, Marco and Daniel; also survived by many aunts, uncles and cousins. Ralph loved hunting, cooking and social gatherings. He loved spending time with family and travelling to Florida and Upstate. Entombment at Holy Rood Cemetery.

Richard J. Jones Richard J. Jones, 40, lifelong resident of Glen Cove, died on Aug.14, 2020 age 40. Former husband of Sharon; son of Kathy and Dick; brother of Christine; also survived by many aunts, uncles, cousins and his best friend Moose. Rick worked alongside his dad at the family business “Road Runners”. He was an avid cyclist. Visitation was at DodgeThomas Funeral Home. Interment was private. Donations may be made to American Heart Association Long Island Cycle Nation, 125 E. Bethpage

George Kurylo George Kurylo, 72, of Glen Cove, died on Aug. 6. Beloved husband of Ann; loving father of Christina Partagas (Jack), Larissa Giambruno (Peter) and the late Katherine; dear brother of the late Walter; cherished grandfather of Nicholas, Jack, Ava, Milania and Jessie; also survived by many nieces and nephews. George came to the United States at 4-years-old and grew up in Manhattan. He played trumpet in the drum and bugle corps. at St. George Ukrainian Catholic School and graduated from La Salle Academy where he sang in the choir. He spent summers with his parents, his brother Walter and friends at Camp St. Basil in Narrowsburg, N.Y. He loved swimming, fishing and sailing. He carried this love for the wilderness throughout his life. He met his wife Ann at the age of 15 and they were married for 50 years. They spent many happy summers at their cabin on the lake with their three children. Ever adventurous, in 1982, George drove the family across country, pulling a pop up camper. George and Ann took a cruise around Europe with friends and fished for salmon in Alaska. But his true passion was spending summers fishing and cooking on an open fire in Narrowsburg. In 1989, as a Senior Court Officer in Nassau County, he received a Certificate of Meritorious Service for Bravery. He retired in 2002 and spent half his time in Glen Spey, N.Y. with his wife, enjoying nature. He loved cooking his famous holiday meals and spending time with his wife, children, five grandchildren and his cat Kit, who loved him and will miss him very much. Visitation was held at Dodge-Thomas Funeral Home of Glen Cove. Mass at St. Andrew’s Ukrainian Catholic Church, Interment was at the Holy Spirit Ukrainian Catholic Cemetery.

Obituary Notices Obituary notices, with or without photographs can be submitted by individuals as well as local funeral establishments. The name of the individual or funeral establishment submitting the obituary should be included. A contact phone number must be included. There is no charge for obituaries. Send to: llane@liherald.com or 2 Endo Blvd., Garden City, NY 11530