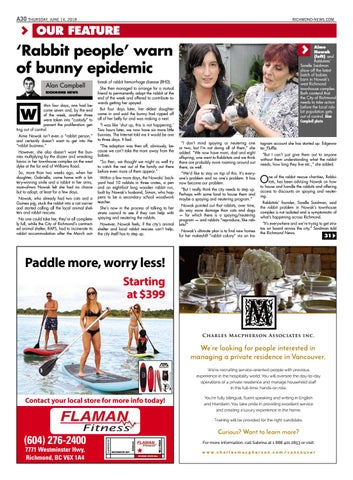 ithin four days, one had become seven and, by the end of the week, another three were taken into “custody” to prevent the proliferation getting out of control.

Aime Nowak isn’t even a “rabbit person,” and certainly doesn’t want to get into the “rabbit business.” However, she also doesn’t want the bunnies multiplying by the dozen and wreaking havoc in her townhouse complex on the west dyke at the far end of Williams Road. So, more than two weeks ago, when her daughter, Gabriella, came home with a lottery-winning smile and a rabbit in her arms, mom-of-two Nowak felt she had no choice but to adopt, at least for a few days. Nowak, who already had two cats and a Guinea pig, stuck the rabbit into a cat carrier and started calling all the local animal shelters and rabbit rescues. No one could take her, they’re all completely full, while the City of Richmond’s contracted animal shelter, RAPS, had to incinerate its rabbit accommodation after the March out-

Aime Nowak (left) and Rabbitats’ Sorelle Saidman show off the latest batch of babies born in Nowak’s west Richmond townhouse complex. Both contend that the City of Richmond needs to take action before the local rabbit population gets out of control. Alan Campbell photo

break of rabbit hemorrhage disease (RHD). She then managed to arrange for a mutual friend to permanently adopt the rabbit at the end of the week and offered to contribute towards getting her spayed. But four days later, her eldest daughter came in and said the bunny had ripped off all of her belly fur and was making a nest. “I was like ‘shut up, this is not happening.’ Two hours later, we now have six more little bunnies. The Internet told me it would be one to three days. It lied. “The adoption was then off, obviously, because we can’t take the mom away from the babies. “So then, we thought we might as well try to catch the rest out of the family out there before even more of them appear.” Within a few more days, the Nowaks’ backyard had 10 rabbits in three crates, a pen and an eight-foot long wooden rabbit run, built by Nowak’s husband, Simon, who happens to be a secondary school woodwork teacher. She’s now in the process of talking to her strata council to see if they can help with spaying and neutering the rabbits. However, Nowak feels, if the city’s animal shelter and local rabbit rescues can’t help, the city itself has to step up.

“I don’t mind spaying or neutering one or two, but I’m not doing all of them,” she added. “We now have mom, dad and eight offspring, one went to Rabbitats and we think there are probably more roaming around out there, as well. “We’d like to stay on top of this. It’s everyone’s problem and no one’s problem. It has now become our problem. “But I really think the city needs to step up. Perhaps with some land to house them and maybe a spaying and neutering program.” Nowak pointed out that rabbits, over time, do way more damage than cats and dogs — for which there is a spaying/neutering program — and rabbits “reproduce, like rabbits!” Nowak’s ultimate plan is to ﬁnd new homes for her makeshift “rabbit colony” via an Ins-

tagram account she has started up: Edgewater_Flufﬂe. “But I can’t just give them out to anyone without them understanding what the rabbit needs, how long they live etc.,” she added.

ne of the rabbit rescue charities, Rabbitats, has been advising Nowak on how to house and handle the rabbits and offering access to discounts on spaying and neutering. Rabbitats’ founder, Sorelle Saidman, said the rabbit problem in Nowak’s townhouse complex is not isolated and is symptomatic of what’s happening across Richmond. “It’s everywhere and we’re trying to get stratas on board across the city,” Saidman told the Richmond News.

We’re looking for people interested in managing a private residence in Vancouver. We’re recruiting service-oriented people with previous experience in the hospitality world. You will oversee the day-to-day operations of a private residence and manage household staff in this full-time, hands-on role.

You’re fully bilingual, fluent speaking and writing in English and Mandarin. You take pride in providing excellent service and creating a luxury experience in the home. Training will be provided for the right candidate.

For more information, call Sabrina at 1 888 421 2853 or visit: www.charlesmacpherson.com/vancouver 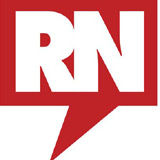