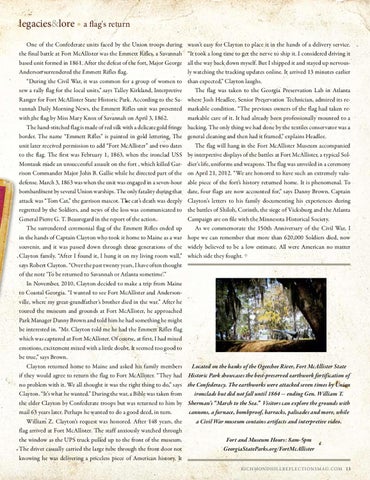 legacies&amp;lore ✴ a flag&#39;s return One of the Confederate units faced by the Union troops during the final battle at Fort McAllister was the Emmett Rifles, a Savannah based unit formed in 1861. After the defeat of the fort, Major George Anderson surrendered the Emmett Rifles flag. “During the Civil War, it was common for a group of women to sew a rally flag for the local units,” says Talley Kirkland, Interpretive Ranger for Fort McAllister State Historic Park. According to the Savannah Daily Morning News, the Emmett Rifles unit was presented with the flag by Miss Mary Knox of Savannah on April 3, 1862. The hand-stitched flag is made of red silk with a delicate gold fringe border. The name “Emmett Rifles” is painted in gold lettering. The unit later received permission to add “Fort McAllister” and two dates to the flag. The first was February 1, 1863, when the ironclad USS Montauk made an unsuccessful assault on the fort , which killed Garrison Commander Major John B. Gallie while he directed part of the defense. March 3, 1863 was when the unit was engaged in a seven-hour bombardment by several Union warships. The only fatality during that attack was “Tom Cat,” the garrison mascot. The cat’s death was deeply regretted by the Soldiers, and news of the loss was communicated to General Pierre G. T. Beauregard in the report of the action. The surrendered ceremonial flag of the Emmett Rifles ended up in the hands of Captain Clayton who took it home to Maine as a war souvenir, and it was passed down through three generations of the Clayton family. “After I found it, I hung it on my living room wall,” says Robert Clayton. “Over the past twenty years, I have often thought of the note ‘To be returned to Savannah or Atlanta sometime’.” In November, 2010, Clayton decided to make a trip from Maine to Coastal Georgia. “I wanted to see Fort McAllister and Andersonville, where my great-grandfather’s brother died in the war.” After he toured the museum and grounds at Fort McAllister, he approached Park Manager Danny Brown and told him he had something he might be interested in. “Mr. Clayton told me he had the Emmett Rifles flag which was captured at Fort McAllister. Of course, at first, I had mixed emotions, excitement mixed with a little doubt. It seemed too good to be true,” says Brown. Clayton returned home to Maine and asked his family members if they would agree to return the flag to Fort McAllister. “They had no problem with it. We all thought it was the right thing to do,” says Clayton. “It’s what he wanted.” During the war, a Bible was taken from the elder Clayton by Confederate troops but was returned to him by mail 63 years later. Perhaps he wanted to do a good deed, in turn. William Z. Clayton’s request was honored. After 148 years, the flag arrived at Fort McAllister. The staff anxiously watched through the window as the UPS truck pulled up to the front of the museum. The driver casually carried the large tube through the front door not knowing he was delivering a priceless piece of American history. It

wasn’t easy for Clayton to place it in the hands of a delivery service. “It took a long time to get the nerve to ship it. I considered driving it all the way back down myself. But I shipped it and stayed up nervously watching the tracking updates online. It arrived 13 minutes earlier than expected,” Clayton laughs. The flag was taken to the Georgia Preservation Lab in Atlanta where Josh Headlee, Senior Preservation Technician, admired its remarkable condition. “The previous owners of the flag had taken remarkable care of it. It had already been professionally mounted to a backing. The only thing we had done by the textiles conservator was a general cleaning and then had it framed,” explains Headlee. The flag will hang in the Fort McAllister Museum accompanied by interpretive displays of the battles at Fort McAllister, a typical Soldier’s life, uniforms and weapons. The flag was unveiled in a ceremony on April 21, 2012. “We are honored to have such an extremely valuable piece of the fort’s history returned home. It is phenomenal. To date, four flags are now accounted for,” says Danny Brown. Captain Clayton’s letters to his family documenting his experiences during the battles of Shiloh, Corinth, the siege of Vicksburg and the Atlanta Campaign are on file with the Minnesota Historical Society. As we commemorate the 150th Anniversary of the Civil War, I hope we can remember that more than 620,000 Soldiers died, now widely believed to be a low estimate. All were American no matter which side they fought. Q