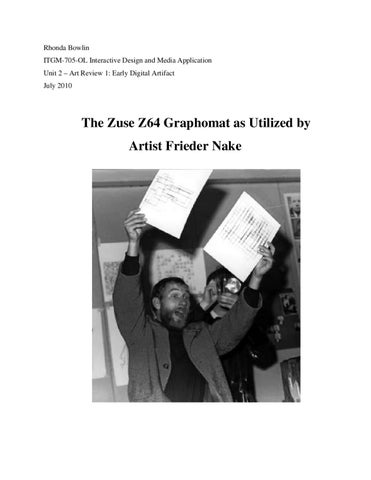 The Zuse Z64 Graphomat as Utilized by Artist Frieder Nake

The Zuse Z64 Graphomat was a digital plotter from 1961 developed by computer pioneer Konrad Zuse. It was one of the first drawing machines. 1 The Z64 was able to output both dots and curves for its primary practical functions, which included plotting for meteorology, textiles, and construction (amongst other scientific and CAD-related applications). 2 The programs themselves were punched onto paper tape and fed into a separate computer. The resulting commands from those calculations would be punched into tape as well, and that punched tape would be the input for the Z64. 3 A digital artifact like the Z64 is rather meaningless without the context of human intent for its use, especially when the notable use diverges from the original intended use. This is why I have chosen to write about both the artifact and one of its influential users rather than only about the artifact. One person who saw the potential for extending the use of the Z64 plotter from its originally intended applications into that of aesthetics was Frieder Nake. While 1965 was when “computer art” (which would have been considered an outrageous term to many at the time – we will approach that topic shortly) debuted in the gallery setting 4 , Nake was experimenting with drawings on the Z64 as of 1963. This was the same year that the US journal Computers and Automation held what author Christoph Klütsch states was the “the first worldwide computer art contest.” 5 The atmosphere, then, was right for a broad variety of individuals and their own unique inspirations for creating computer art. Nake’s inspiration occurred when he was employed as a research assistant at the Technical University of Stuttgart in Germany. His task was to program for the Z64 and its connecting computer, the Standard Elektrik Lorenz (SEL) ER65. The art was a result of Nake testing his programs with aesthetics in mind. There was no software with the plotter; it was just Nake hammering out machine code for it. There was also no such thing as a monitor at the time –

the closest thing to this sort of screen display was in devices like oscilloscopes (some individuals had created analog artwork with oscillograms prior to Nake’s plotter drawings). 6 This left the artist/scientist/operator with the painstaking chore of working, only to see the artwork after what was oftentimes hours of effort. However, this was part of the attraction of some pieces, such as the following example of Hommage à Paul Klee, 13/9/65 Nr.2 (1965), in which there was a series of drawings produced to explore the possibilities of randomness.

The relationship of “randomness” (being that the computerized number generator only generates pseudo-randomness) with human intuition and creativity was of great interest to Nake. His own recollection of the 1965 Georg Nees (an influential fellow computer artist and mathematician) exhibit tells of the crowd – especially the traditional artists within the crowd reactions to these ideas. The event was at theorist Max Bense’s “Studiengalerie”, which was located within the University. Nake claimed that some guests were nervous, some hostile, and some simply left at the thought of the Nees drawings being considered art. 8 Nees’ (who also employed the Z64 plotter for his art but in conjunction with a different computer) and Nake’s algorithms were in place of the standard design decisions. Their hands did not directly control the four pens of the Z64. This lack of tactile response from a human may, in my opinion, have additionally challenged those that could not handle the notion of the seemingly indirect influence of the computer scientist to be as valid as the touch of an artist. Regardless, the fact that Nees was able to display his work influenced Nake to do the same. 9

Now, we are able to step back and see such advances as quite telling of the time in art history. Honor Beddard, curator at the Victoria &amp; Albert Museum, explains that “…early computer art tended to be linear, geometric and abstract, and although, in part, this was a direct result of the limited output devices of the period, it is also possible to see it as part of the Modernist culture out of which it arose.” 10 Our current culture is so saturated with art and design created with computer assistance to the point where it is easy to forget the concerns that the Bense crowd had. Defining art in the 21st century is a heady task, requiring that we address aesthetics, technology, mass production, and the object versus the idea and process (just to name a few issues). The Z64 Graphomat, along with its cousins, is representative of the birth of the computer into the artist’s creation process and its relative acceptance into the culture of art criticism. Recently (~2004), Nake was delightfully dismissive of the end products that he created even when praising the movement itself – “The drawings were not very exciting. But the

Frieder Nake, “Personal Recollections of a Distant Beginning,” essay included in the book by Linda Candy and Ernest A. Edmonds, Explorations in Art and Technology (London: Springer, 2002), 6-7. 9 Ibid. 10 Beddard.

principle was!” 11 I disagree with his humble sentiment about the drawings’ aesthetics but agree enthusiastically with embracing the idea that led to our present-day fusion of computers and art.

Trailer from CompArt showcasing 40 years of Frieder Nake, including footage of him using the Z64: http://www.youtube.com/watch?v=e4_aOTtR9Wc