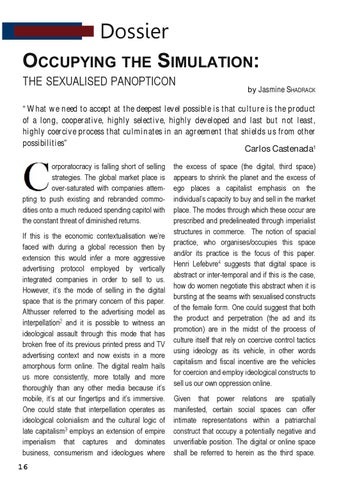 “What we need to accept at the deepest level possible is that culture is the product of a long, cooperative, highly selective, highly developed and last but not least, highly coercive process that culminates in an agreement that shields us from other possibilities” Carlos Castenada1

orporatocracy is falling short of selling strategies. The global market place is over­saturated with companies attem­ pting to push existing and rebranded commo­ dities onto a much reduced spending capitol with the constant threat of diminished returns.

If this is the economic contextualisation we’re faced with during a global recession then by extension this would infer a more aggressive advertising protocol employed by vertically integrated companies in order to sell to us. However, it’s the mode of selling in the digital space that is the primary concern of this paper. Althusser referred to the advertising model as interpellation2 and it is possible to witness an ideological assault through this mode that has broken free of its previous printed press and TV advertising context and now exists in a more amorphous form online. The digital realm hails us more consistently, more totally and more thoroughly than any other media because it’s mobile, it’s at our fingertips and it’s immersive. One could state that interpellation operates as ideological colonialism and the cultural logic of late capitalism3 employs an extension of empire imperialism that captures and dominates business, consumerism and ideologues where

the excess of space (the digital, third space) appears to shrink the planet and the excess of ego places a capitalist emphasis on the individual’s capacity to buy and sell in the market place. The modes through which these occur are prescribed and predelineated through imperialist structures in commerce. The notion of spacial practice, who organises/occupies this space and/or its practice is the focus of this paper. Henri Lefebvre4 suggests that digital space is abstract or inter­temporal and if this is the case, how do women negotiate this abstract when it is bursting at the seams with sexualised constructs of the female form. One could suggest that both the product and perpetration (the ad and its promotion) are in the midst of the process of culture itself that rely on coercive control tactics using ideology as its vehicle, in other words capitalism and fiscal incentive are the vehicles for coercion and employ ideological constructs to sell us our own oppression online. Given that power relations are spatially manifested, certain social spaces can offer intimate representations within a patriarchal construct that occupy a potentially negative and unverifiable position. The digital or online space shall be referred to herein as the third space.

Artéfact presents a study commited to "pornographisation of pop culture". Marys Hertiman introduces a review regarding pornographisation of pop culture. Jasmine Shadrack analyzes this theme from the perspective of gender studies. Catherine Curran Vigier decodes a worldwide bestseller 50 shades of grey by E.L. James. Then Cyril Dumas shares his study on ancient pornography and Vicky Gilpin analyzes August Strindberg's Miss Julie. Finally, João Gabriel da Silva Lima closes the dossier with an article presenting a relationship between desire, art and pornography. Here are some tools that elaborate the way of perceiving this phenomenon (for some disturbing, for others - liberating). Also, Artéfact presents an overview of film and photography. The second issue offers even more of literary reviews and few poems by Jorge Artel (for the very first time translated from the Spanish)... 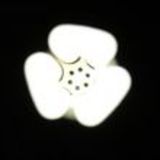