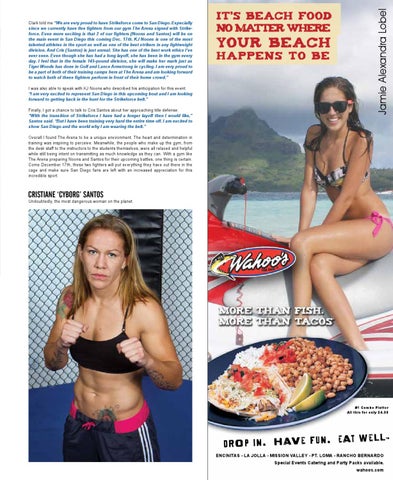 I was also able to speak with KJ Noons who described his anticipation for this event: “I am very excited to represent San Diego in this upcoming bout and I am looking forward to getting back in the hunt for the Strikeforce belt.” Finally, I got a chance to talk to Cris Santos about her approaching title defense: “With the transition of Strikeforce I have had a longer layoff then I would like,” Santos said. “But I have been training very hard the entire time off. I am excited to show San Diego and the world why I am wearing the belt.”

It’s Beach food no matter where

your beach happens to be

Clark told me “We are very proud to have Strikeforce come to San Diego. Especially since we currently have five fighters from our gym The Arena signed with Strikeforce. Even more exciting is that 2 of our fighters (Noons and Santos) will be on the main event in San Diego this coming Dec. 17th. KJ Noons is one of the most talented athletes in the sport as well as one of the best strikers in any lightweight division. And Cris (Santos) is just unreal. She has one of the best work ethics I’ve ever seen. Even though she has had a long layoff, she has been in the gym every day. I feel that in the female 145-pound division, she will make her mark just as Tiger Woods has done in Golf and Lance Armstrong in cycling. I am very proud to be a part of both of their training camps here at The Arena and am looking forward to watch both of these fighters perform in front of their home crowd.”

Overall I found The Arena to be a unique environment. The heart and determination in training was inspiring to perceive. Meanwhile, the people who make up the gym, from the desk staff to the instructors to the students themselves, were all relaxed and helpful while still being intent on transmitting as much knowledge as they can. With a gym like The Arena preparing Noons and Santos for their upcoming battles, one thing is certain. Come December 17th, these two fighters will put everything they have out there in the cage and make sure San Diego fans are left with an increased appreciation for this incredible sport.

Undoubtedly, the most dangerous woman on the planet. 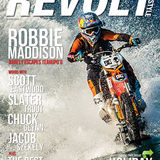