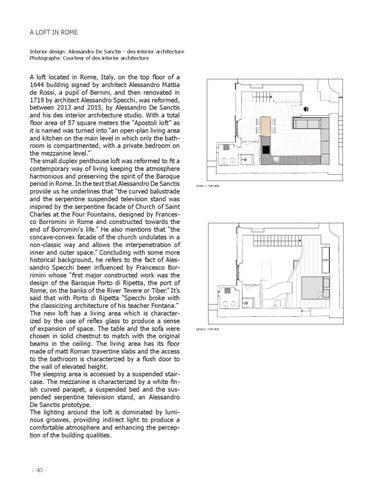 A loft located in Rome, Italy, on the top floor of a 1644 building signed by architect Alessandro Mattia de Rossi, a pupil of Bernini, and then renovated in 1719 by architect Alessandro Specchi, was reformed, between 2013 and 2015, by Alessandro De Sanctis and his des interior architecture studio. With a total floor area of 57 square meters the “Apostoli loft” as it is named was turned into “an open-plan living area and kitchen on the main level in which only the bathroom is compartmented, with a private bedroom on the mezzanine level.” The small duplex penthouse loft was reformed to fit a contemporary way of living keeping the atmosphere harmonious and preserving the spirit of the Baroque period in Rome. In the text that Alessandro De Sanctis provide us he underlines that “the curved balustrade and the serpentine suspended television stand was inspired by the serpentine facade of Church of Saint Charles at the Four Fountains, designed by Francesco Borromini in Rome and constructed towards the end of Borromini's life.” He also mentions that “the concave-convex facade of the church undulates in a non-classic way and allows the interpenetration of inner and outer space.” Concluding with some more historical background, he refers to the fact of Alessandro Specchi been influenced by Francesco Borrimini whose “first major constructed work was the design of the Baroque Porto di Ripetta, the port of Rome, on the banks of the River Tevere or Tiber.” It’s said that with Porto di Ripetta “Specchi broke with the classicizing architecture of his teacher Fontana.” The new loft has a living area which is characterized by the use of reflex glass to produce a sense of expansion of space. The table and the sofa were chosen in solid chestnut to match with the original beams in the ceiling. The living area has its floor made of matt Roman travertine slabs and the access to the bathroom is characterized by a flush door to the wall of elevated height. The sleeping area is accessed by a suspended staircase. The mezzanine is characterized by a white finish curved parapet, a suspended bed and the suspended serpentine television stand, an Alessandro De Sanctis prototype. The lighting around the loft is dominated by luminous grooves, providing indirect light to produce a comfortable atmosphere and enhancing the perception of the building qualities.