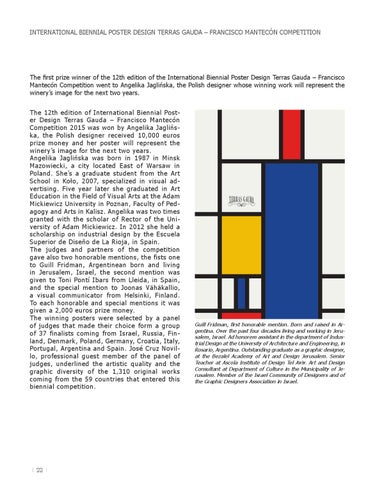 The first prize winner of the 12th edition of the International Biennial Poster Design Terras Gauda – Francisco Mantecón Competition went to Angelika Jaglińska, the Polish designer whose winning work will represent the winery’s image for the next two years. The 12th edition of International Biennial Poster Design Terras Gauda – Francisco Mantecón Competition 2015 was won by Angelika Jaglińska, the Polish designer received 10,000 euros prize money and her poster will represent the winery’s image for the next two years. Angelika Jaglińska was born in 1987 in Minsk Mazowiecki, a city located East of Warsaw in Poland. She’s a graduate student from the Art School in Koło, 2007, specialized in visual advertising. Five year later she graduated in Art Education in the Field of Visual Arts at the Adam Mickiewicz University in Poznan, Faculty of Pedagogy and Arts in Kalisz. Angelika was two times granted with the scholar of Rector of the University of Adam Mickiewicz. In 2012 she held a scholarship on industrial design by the Escuela Superior de Diseño de La Rioja, in Spain. The judges and partners of the competition gave also two honorable mentions, the fists one to Guill Fridman, Argentinean born and living in Jerusalem, Israel, the second mention was given to Toni Pontí Ibars from Lleida, in Spain, and the special mention to Joonas Vähäkallio, a visual communicator from Helsinki, Finland. To each honorable and special mentions it was given a 2,000 euros prize money. The winning posters were selected by a panel of judges that made their choice form a group of 37 finalists coming from Israel, Russia, Finland, Denmark, Poland, Germany, Croatia, Italy, Portugal, Argentina and Spain. José Cruz Novillo, professional guest member of the panel of judges, underlined the artistic quality and the graphic diversity of the 1,310 original works coming from the 59 countries that entered this biennial competition.

Guill Fridman, first honorable mention. Born and raised in Argentina. Over the past four decades living and working in Jerusalem, Israel. Ad honorem assistant in the department of Industrial Design at the University of Architecture and Engineering, in Rosario, Argentina. Outstanding graduate as a graphic designer, at the Bezalel Academy of Art and Design Jerusalem. Senior Teacher at Ascola Institute of Design Tel Aviv. Art and Design Consultant at Department of Culture in the Municipality of Jerusalem. Member of the Israel Community of Designers and of the Graphic Designers Association in Israel.