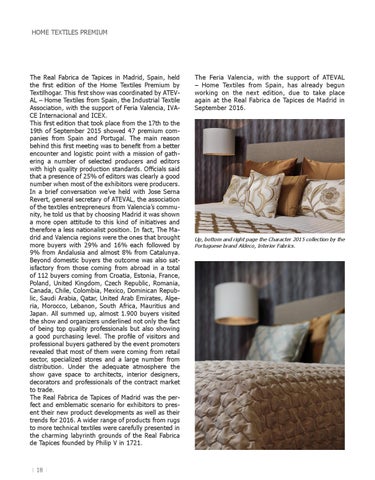 The Real Fabrica de Tapices in Madrid, Spain, held the first edition of the Home Textiles Premium by Textilhogar. This first show was coordinated by ATEVAL – Home Textiles from Spain, the Industrial Textile Association, with the support of Feria Valencia, IVACE Internacional and ICEX. This first edition that took place from the 17th to the 19th of September 2015 showed 47 premium companies from Spain and Portugal. The main reason behind this first meeting was to benefit from a better encounter and logistic point with a mission of gathering a number of selected producers and editors with high quality production standards. Officials said that a presence of 25% of editors was clearly a good number when most of the exhibitors were producers. In a brief conversation we’ve held with Jose Serna Revert, general secretary of ATEVAL, the association of the textiles entrepreneurs from Valencia’s community, he told us that by choosing Madrid it was shown a more open attitude to this kind of initiatives and therefore a less nationalist position. In fact, The Madrid and Valencia regions were the ones that brought more buyers with 29% and 16% each followed by 9% from Andalusia and almost 8% from Catalunya. Beyond domestic buyers the outcome was also satisfactory from those coming from abroad in a total of 112 buyers coming from Croatia, Estonia, France, Poland, United Kingdom, Czech Republic, Romania, Canada, Chile, Colombia, Mexico, Dominican Republic, Saudi Arabia, Qatar, United Arab Emirates, Algeria, Morocco, Lebanon, South Africa, Mauritius and Japan. All summed up, almost 1.900 buyers visited the show and organizers underlined not only the fact of being top quality professionals but also showing a good purchasing level. The profile of visitors and professional buyers gathered by the event promoters revealed that most of them were coming from retail sector, specialized stores and a large number from distribution. Under the adequate atmosphere the show gave space to architects, interior designers, decorators and professionals of the contract market to trade. The Real Fabrica de Tapices of Madrid was the perfect and emblematic scenario for exhibitors to present their new product developments as well as their trends for 2016. A wider range of products from rugs to more technical textiles were carefully presented in the charming labyrinth grounds of the Real Fabrica de Tapices founded by Philip V in 1721.

The Feria Valencia, with the support of ATEVAL – Home Textiles from Spain, has already begun working on the next edition, due to take place again at the Real Fabrica de Tapices de Madrid in September 2016.

Up, bottom and right page the Character 2015 collection by the Portuguese brand Aldeco, Interior Fabrics.