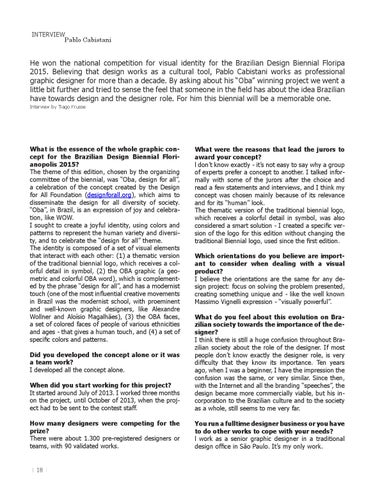 He won the national competition for visual identity for the Brazilian Design Biennial Floripa 2015. Believing that design works as a cultural tool, Pablo Cabistani works as professional graphic designer for more than a decade. By asking about his “Oba” winning project we went a little bit further and tried to sense the feel that someone in the field has about the idea Brazilian have towards design and the designer role. For him this biennial will be a memorable one. Interview by Tiago Krusse

What is the essence of the whole graphic concept for the Brazilian Design Biennial Florianopolis 2015? The theme of this edition, chosen by the organizing committee of the biennial, was “Oba, design for all”, a celebration of the concept created by the Design for All Foundation (designforall.org), which aims to disseminate the design for all diversity of society. “Oba”, in Brazil, is an expression of joy and celebration, like WOW. I sought to create a joyful identity, using colors and patterns to represent the human variety and diversity, and to celebrate the “design for all” theme. The identity is composed of a set of visual elements that interact with each other: (1) a thematic version of the traditional biennial logo, which receives a colorful detail in symbol, (2) the OBA graphic (a geometric and colorful OBA word), which is complemented by the phrase “design for all”, and has a modernist touch (one of the most influential creative movements in Brazil was the modernist school, with proeminent and well-known graphic designers, like Alexandre Wollner and Aloísio Magalhães), (3) the OBA faces, a set of colored faces of people of various ethnicities and ages - that gives a human touch, and (4) a set of specific colors and patterns.

What were the reasons that lead the jurors to award your concept? l don’t know exactly - it’s not easy to say why a group of experts prefer a concept to another. I talked informally with some of the jurors after the choice and read a few statements and interviews, and I think my concept was chosen mainly because of its relevance and for its “human” look. The thematic version of the traditional biennial logo, which receives a colorful detail in symbol, was also considered a smart solution - I created a specific version of the logo for this edition without changing the traditional Biennial logo, used since the first edition.

When did you start working for this project? It started around July of 2013. I worked three months on the project, until October of 2013, when the project had to be sent to the contest staff.

Which orientations do you believe are important to consider when dealing with a visual product? I believe the orientations are the same for any design project: focus on solving the problem presented, creating something unique and - like the well known Massimo Vignelli expression - “visually powerful”. What do you feel about this evolution on Brazilian society towards the importance of the designer? I think there is still a huge confusion throughout Brazilian society about the role of the designer. If most people don’t know exactly the designer role, is very difficulty that they know its importance. Ten years ago, when I was a beginner, I have the impression the confusion was the same, or very similar. Since then, with the Internet and all the branding “speeches”, the design became more commercially viable, but his incorporation to the Brazilian culture and to the society as a whole, still seems to me very far.

How many designers were competing for the prize? There were about 1.300 pre-registered designers or teams, with 90 validated works.

You run a fulltime designer business or you have to do other works to cope with your needs? l work as a senior graphic designer in a traditional design office in São Paulo. It’s my only work.