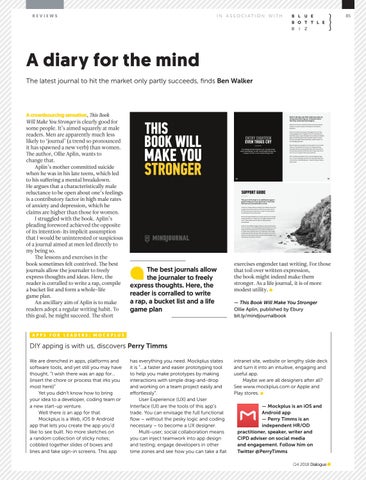 A diary for the mind The latest journal to hit the market only partly succeeds, finds Ben Walker

A crowdsourcing sensation, This Book Will Make You Stronger is clearly good for some people. It’s aimed squarely at male readers. Men are apparently much less likely to ‘journal’ (a trend so pronounced it has spawned a new verb) than women. The author, Ollie Aplin, wants to change that. Aplin’s mother committed suicide when he was in his late teens, which led to his suﬀering a mental breakdown. He argues that a characteristically male reluctance to be open about one’s feelings is a contributory factor in high male rates of anxiety and depression, which he claims are higher than those for women. I struggled with the book. Aplin’s pleading foreword achieved the opposite of its intention: its implicit assumption that I would be uninterested or suspicious of a journal aimed at men led directly to my being so. The lessons and exercises in the book sometimes felt contrived. The best journals allow the journaler to freely express thoughts and ideas. Here, the reader is corralled to write a rap, compile a bucket list and form a whole-life game plan. An ancillary aim of Aplin is to make readers adopt a regular writing habit. To this goal, he might succeed. The short

The best journals allow the journaler to freely express thoughts. Here, the reader is corralled to write a rap, a bucket list and a life game plan

exercises engender taut writing. For those that toil over written expression, the book might indeed make them stronger. As a life journal, it is of more modest utility. — This Book Will Make You Stronger Ollie Aplin, published by Ebury bit.ly/mindjournalbook

DIY apping is with us, discovers Perry Timms We are drenched in apps, platforms and software tools, and yet still you may have thought, “I wish there was an app for… (insert the chore or process that irks you most here)” Yet you didn’t know how to bring your idea to a developer, coding team or a new start-up venture. Well there is an app for that. Mockplus is a Web, iOS & Android app that lets you create the app you’d like to see built. No more sketches on a random collection of sticky notes; cobbled together slides of boxes and lines and fake sign-in screens. This app

has everything you need. Mockplus states it is “...a faster and easier prototyping tool to help you make prototypes by making interactions with simple drag-and-drop and working on a team project easily and effortlessly”. User Experience (UX) and User Interface (UI) are the tools of this app’s trade. You can envisage the full functional flow – without the pesky logic and coding necessary – to become a UX designer. Multi-user, social collaboration means you can inject teamwork into app design and testing; engage developers in other time zones and see how you can take a flat

intranet site, website or lengthy slide deck and turn it into an intuitive, engaging and useful app. Maybe we are all designers after all? See www.mockplus.com or Apple and Play stores. — Mockplus is an iOS and Android app — Perry Timms is an independent HR/OD practitioner, speaker, writer and CIPD adviser on social media and engagement. Follow him on Twitter @PerryTimms Q4 2018 Dialogue