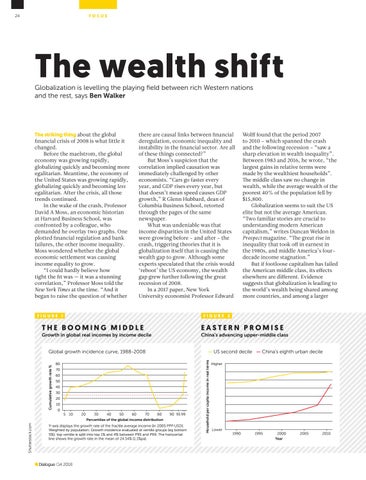 The wealth shift Globalization is levelling the playing field between rich Western nations and the rest, says Ben Walker

The striking thing about the global financial crisis of 2008 is what little it changed. Before the maelstrom, the global economy was growing rapidly, globalizing quickly and becoming more egalitarian. Meantime, the economy of the United States was growing rapidly, globalizing quickly and becoming less egalitarian. After the crisis, all those trends continued. In the wake of the crash, Professor David A Moss, an economic historian at Harvard Business School, was confronted by a colleague, who demanded he overlay two graphs. One plotted financial regulation and bank failures, the other income inequality. Moss wondered whether the global economic settlement was causing income equality to grow. “I could hardly believe how tight the fit was — it was a stunning correlation,” Professor Moss told the New York Times at the time. “And it began to raise the question of whether

there are causal links between financial deregulation, economic inequality and instability in the financial sector. Are all of these things connected?” But Moss’s suspicion that the correlation implied causation was immediately challenged by other economists. “Cars go faster every year, and GDP rises every year, but that doesn’t mean speed causes GDP growth,” R Glenn Hubbard, dean of Columbia Business School, retorted through the pages of the same newspaper. What was undeniable was that income disparities in the United States were growing before – and after – the crash, triggering theories that it is globalization itself that is causing the wealth gap to grow. Although some experts speculated that the crisis would ‘reboot’ the US economy, the wealth gap grew further following the great recession of 2008. In a 2017 paper, New York University economist Professor Edward

Y-axis displays the growth rate of the fractile average income (in 2005 PPP USD). Weighted by population. Growth incidence evaluated at ventile groups (eg bottom 5%); top ventile is split into top 1% and 4% between P95 and P99. The horizontal line shows the growth rate in the mean of 24.34% (1.1%pa).

Wolﬀ found that the period 2007 to 2010 – which spanned the crash and the following recession – “saw a sharp elevation in wealth inequality”. Between 1983 and 2016, he wrote, “the largest gains in relative terms were made by the wealthiest households”. The middle class saw no change in wealth, while the average wealth of the poorest 40% of the population fell by $15,800. Globalization seems to suit the US elite but not the average American. “Two familiar stories are crucial to understanding modern American capitalism,” writes Duncan Weldon in Prospect magazine. “The great rise in inequality that took oﬀ in earnest in the 1980s, and middle America’s fourdecade income stagnation.” But if footloose capitalism has failed the American middle class, its eﬀects elsewhere are diﬀerent. Evidence suggests that globalization is leading to the world’s wealth being shared among more countries, and among a larger