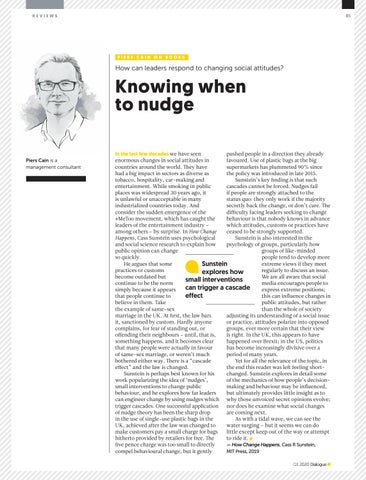 How can leaders respond to changing social attitudes?

Knowing when to nudge Piers Cain is a management consultant

In the last few decades we have seen pushed people in a direction they already enormous changes in social attitudes in favoured. Use of plastic bags at the big countries around the world. They have supermarkets has plummeted 90% since had a big impact in sectors as diverse as the policy was introduced in late 2015. tobacco, hospitality, car-making and Sunstein’s key finding is that such entertainment. While smoking in public cascades cannot be forced. Nudges fail places was widespread 30 years ago, it if people are strongly attached to the is unlawful or unacceptable in many status quo: they only work if the majority industrialized countries today. And secretly back the change, or don’t care. The consider the sudden emergence of the diﬃculty facing leaders seeking to change #MeToo movement, which has caught the behaviour is that nobody knows in advance leaders of the entertainment industry – which attitudes, customs or practices have among others – by surprise. In How Change ceased to be strongly supported. Happens, Cass Sunstein uses psychological Sunstein is also interested in the and social science research to explain how psychology of groups, particularly how public opinion can change groups of like-minded so quickly. people tend to develop more He argues that some extreme views if they meet Sunstein practices or customs regularly to discuss an issue. explores how become outdated but We are all aware that social small interventions continue to be the norm media encourages people to can trigger a cascade simply because it appears express extreme positions; effect that people continue to this can influence changes in believe in them. Take public attitudes, but rather the example of same-sex than the whole of society marriage in the UK. At first, the law bars adjusting its understanding of a social issue it, sanctioned by custom. Hardly anyone or practice, attitudes polarize into opposed complains, for fear of standing out, or groups, ever more certain that their view oﬀending their neighbours – until, that is, is right. In the UK, this appears to have something happens, and it becomes clear happened over Brexit; in the US, politics that many people were actually in favour has become increasingly divisive over a of same-sex marriage, or weren’t much period of many years. bothered either way. There is a “cascade Yet for all the relevance of the topic, in eﬀect” and the law is changed. the end this reader was left feeling shortSunstein is perhaps best known for his changed. Sunstein explores in detail some work popularizing the idea of ‘nudges’, of the mechanics of how people’s decisionsmall interventions to change public making and behaviour may be influenced, behaviour, and he explores how far leaders but ultimately provides little insight as to can engineer change by using nudges which why those unvoiced secret opinions evolve; trigger cascades. One successful application nor does he examine what social changes of nudge theory has been the sharp drop are coming next. in the use of single-use plastic bags in the As with a tidal wave, we can see the UK, achieved after the law was changed to water surging – but it seems we can do make customers pay a small charge for bags little except keep out of the way or attempt hitherto provided by retailers for free. The to ride it. five pence charge was too small to directly — How Change Happens, Cass R Sunstein, compel behavioural change, but it gently MIT Press, 2019 Q1 2020 Dialogue