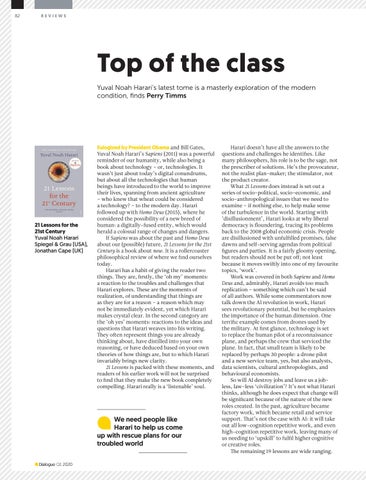 Top of the class Yuval Noah Harari’s latest tome is a masterly exploration of the modern condition, finds Perry Timms

Eulogized by President Obama and Bill Gates, Yuval Noah Harari’s Sapiens (2011) was a powerful reminder of our humanity, while also being a book about technology – or, technologies. It wasn’t just about today’s digital conundrums, but about all the technologies that human beings have introduced to the world to improve their lives, spanning from ancient agriculture – who knew that wheat could be considered a technology? – to the modern day. Harari followed up with Homo Deus (2015), where he considered the possibility of a new breed of human: a digitally-fused entity, which would herald a colossal range of changes and dangers. If Sapiens was about the past and Homo Deus about our (possible) future, 21 Lessons for the 21st Century is a book about now. It is a rollercoaster philosophical review of where we find ourselves today. Harari has a habit of giving the reader two things. They are, firstly, the ‘oh my’ moments: a reaction to the troubles and challenges that Harari explores. These are the moments of realization, of understanding that things are as they are for a reason – a reason which may not be immediately evident, yet which Harari makes crystal clear. In the second category are the ‘oh yes’ moments: reactions to the ideas and questions that Harari weaves into his writing. They often represent things you are already thinking about, have distilled into your own reasoning, or have deduced based on your own theories of how things are, but to which Harari invariably brings new clarity. 21 Lessons is packed with these moments, and readers of his earlier work will not be surprised to find that they make the new book completely compelling. Harari really is a ‘listenable’ soul.

Harari doesn’t have all the answers to the questions and challenges he identifies. Like many philosophers, his role is to be the sage, not the prescriber of solutions. He’s the provocateur, not the realist plan-maker; the stimulator, not the product creator. What 21 Lessons does instead is set out a series of socio-political, socio-economic, and socio-anthropological issues that we need to examine – if nothing else, to help make sense of the turbulence in the world. Starting with ‘disillusionment’, Harari looks at why liberal democracy is floundering, tracing its problems back to the 2008 global economic crisis. People are disillusioned with unfulfilled promises, false dawns and self-serving agendas from political figures and parties. It is a fairly gloomy opening, but readers should not be put oﬀ; not least because it moves swiftly into one of my favourite topics, ‘work’. Work was covered in both Sapiens and Homo Deus and, admirably, Harari avoids too much replication – something which can’t be said of all authors. While some commentators now talk down the AI revolution in work, Harari sees revolutionary potential, but he emphasizes the importance of the human dimension. One terrific example comes from drones used by the military. At first glance, technology is set to replace the human pilot of a reconnaissance plane, and perhaps the crew that serviced the plane. In fact, that small team is likely to be replaced by perhaps 30 people: a drone pilot and a new service team, yes, but also analysts, data scientists, cultural anthropologists, and behavioural economists. So will AI destroy jobs and leave us a jobless, law-less ‘civilization’? It’s not what Harari thinks, although he does expect that change will be significant because of the nature of the new roles created. In the past, agriculture became factory work, which became retail and service support. That’s not the case with AI: it will take out all low-cognition repetitive work, and even high-cognition repetitive work, leaving many of us needing to ‘upskill’ to fulfil higher cognitive or creative roles. The remaining 19 lessons are wide ranging.