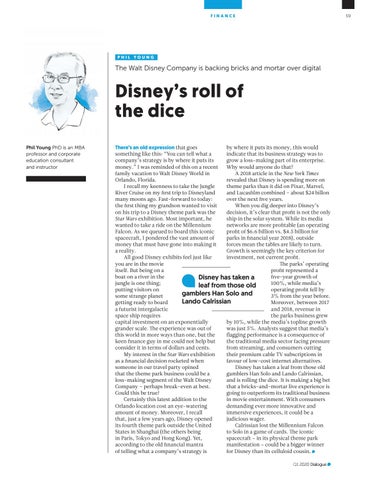 The Walt Disney Company is backing bricks and mortar over digital

There’s an old expression that goes by where it puts its money, this would something like this: “You can tell what a indicate that its business strategy was to company’s strategy is by where it puts its grow a loss-making part of its enterprise. money.” I was reminded of this on a recent Why would anyone do that? family vacation to Walt Disney World in A 2018 article in the New York Times Orlando, Florida. revealed that Disney is spending more on I recall my keenness to take the Jungle theme parks than it did on Pixar, Marvel, River Cruise on my first trip to Disneyland and Lucasfilm combined – about $24 billon many moons ago. Fast-forward to today: over the next five years. the first thing my grandson wanted to visit When you dig deeper into Disney’s on his trip to a Disney theme park was the decision, it’s clear that profit is not the only Star Wars exhibition. Most important, he ship in the solar system. While its media wanted to take a ride on the Millennium networks are more profitable (an operating Falcon. As we queued to board this iconic profit of $6.6 billion vs. $4.5 billion for spacecraft, I pondered the vast amount of parks in financial year 2018), outside money that must have gone into making it forces mean the tables are likely to turn. a reality. Growth is seemingly the key criterion for All good Disney exhibits feel just like investment, not current profit. you are in the movie The parks’ operating itself. But being on a profit represented a boat on a river in the five-year growth of Disney has taken a jungle is one thing; 100%, while media’s leaf from those old putting visitors on operating profit fell by gamblers Han Solo and some strange planet 3% from the year before. Lando Calrissian getting ready to board Moreover, between 2017 a futurist intergalactic and 2018, revenue in space ship requires the parks business grew capital investment on an exponentially by 10%, while the media’s topline growth grander scale. The experience was out of was just 5%. Analysts suggest that media’s this world in more ways than one, but the flagging performance is a consequence of keen finance guy in me could not help but the traditional media sector facing pressure consider it in terms of dollars and cents. from streaming, and consumers cutting My interest in the Star Wars exhibition their premium cable TV subscriptions in as a financial decision rocketed when favour of low-cost internet alternatives. someone in our travel party opined Disney has taken a leaf from those old that the theme park business could be a gamblers Han Solo and Lando Calrissian, loss-making segment of the Walt Disney and is rolling the dice. It is making a big bet Company – perhaps break-even at best. that a bricks-and-mortar live experience is Could this be true? going to outperform its traditional business Certainly this latest addition to the in movie entertainment. With consumers Orlando location cost an eye-watering demanding ever more innovative and amount of money. Moreover, I recall immersive experiences, it could be a that, just a few years ago, Disney opened judicious wager. its fourth theme park outside the United Calrissian lost the Millennium Falcon States in Shanghai (the others being to Solo in a game of cards. The iconic in Paris, Tokyo and Hong Kong). Yet, spacecraft – in its physical theme park according to the old financial mantra manifestation – could be a bigger winner of telling what a company’s strategy is for Disney than its celluloid cousin. Q1 2020 Dialogue

The second wave: Preparing for digital transformation New technologies are starting to transform products, services and business models that have until now looked out of reach. Yet the urgent questions confronting leaders are not about technology: they are instead about strategy, mindset, organizational capability and willingness to change. They are fundamentally human. In this issue, we look at those human dimensions. How can leaders rethink their strategies for the new environments that lie ahead? What is the mindset that will be needed? How can leaders build the organizational capabilities to thrive in the years ahead, and how can they engage people throughout their organizations? And where are the world-leading exemplars that point the way ahead?