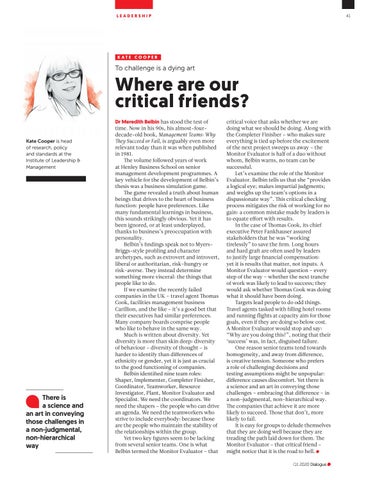 To challenge is a dying art

Where are our critical friends? Kate Cooper is head of research, policy and standards at the Institute of Leadership & Management

There is a science and an art in conveying those challenges in a non-judgmental, non-hierarchical way

Dr Meredith Belbin has stood the test of time. Now in his 90s, his almost-fourdecade-old book, Management Teams: Why They Succeed or Fail, is arguably even more relevant today than it was when published in 1981. The volume followed years of work at Henley Business School on senior management development programmes. A key vehicle for the development of Belbin’s thesis was a business simulation game. The game revealed a truth about human beings that drives to the heart of business function: people have preferences. Like many fundamental learnings in business, this sounds strikingly obvious. Yet it has been ignored, or at least underplayed, thanks to business’s preoccupation with personality. Belbin’s findings speak not to MyersBriggs-style profiling and character archetypes, such as extrovert and introvert, liberal or authoritarian, risk-hungry or risk-averse. They instead determine something more visceral: the things that people like to do. If we examine the recently failed companies in the UK – travel agent Thomas Cook, facilities management business Carillion, and the like – it’s a good bet that their executives had similar preferences. Many company boards comprise people who like to behave in the same way. Much is written about diversity. Yet diversity is more than skin deep: diversity of behaviour – diversity of thought – is harder to identify than diﬀerences of ethnicity or gender, yet it is just as crucial to the good functioning of companies. Belbin identified nine team roles: Shaper, Implementer, Completer Finisher, Coordinator, Teamworker, Resource Investigator, Plant, Monitor Evaluator and Specialist. We need the coordinators. We need the shapers – the people who can drive an agenda. We need the teamworkers who strive to include everybody: because those are the people who maintain the stability of the relationships within the group. Yet two key figures seem to be lacking from several senior teams. One is what Belbin termed the Monitor Evaluator – that

critical voice that asks whether we are doing what we should be doing. Along with the Completer Finisher – who makes sure everything is tied up before the excitement of the next project sweeps us away – the Monitor Evaluator is half of a duo without whom, Belbin warns, no team can be successful. Let’s examine the role of the Monitor Evaluator. Belbin tells us that she “provides a logical eye; makes impartial judgments; and weighs up the team’s options in a dispassionate way”. This critical checking process mitigates the risk of working for no gain: a common mistake made by leaders is to equate eﬀort with results. In the case of Thomas Cook, its chief executive Peter Fankhauser assured stakeholders that he was “working tirelessly” to save the firm. Long hours and hard graft are often used by leaders to justify large financial compensation: yet it is results that matter, not inputs. A Monitor Evaluator would question – every step of the way – whether the next tranche of work was likely to lead to success; they would ask whether Thomas Cook was doing what it should have been doing. Targets lead people to do odd things. Travel agents tasked with filling hotel rooms and running flights at capacity aim for those goals, even if they are doing so below cost. A Monitor Evaluator would stop and say: “Why are you doing this?”, noting that their ‘success’ was, in fact, disguised failure. One reason senior teams tend towards homogeneity, and away from diﬀerence, is creative tension. Someone who prefers a role of challenging decisions and testing assumptions might be unpopular: diﬀerence causes discomfort. Yet there is a science and an art in conveying those challenges – embracing that diﬀerence – in a non-judgmental, non-hierarchical way. The companies that achieve it are more likely to succeed. Those that don’t, more likely to fail. It is easy for groups to delude themselves that they are doing well because they are treading the path laid down for them. The Monitor Evaluator – that critical friend – might notice that it is the road to hell. Q1 2020 Dialogue