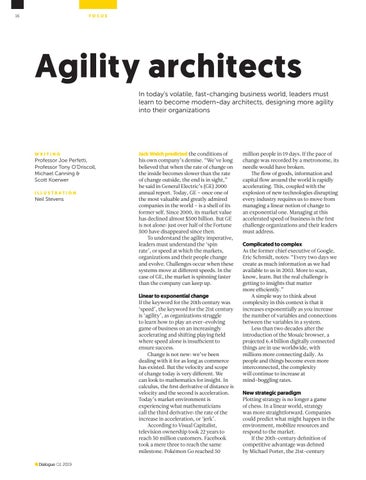 Jack Welch predicted the conditions of his own company’s demise. “We’ve long believed that when the rate of change on the inside becomes slower than the rate of change outside, the end is in sight,” he said in General Electric’s (GE) 2000 annual report. Today, GE – once one of the most valuable and greatly admired companies in the world – is a shell of its former self. Since 2000, its market value has declined almost $500 billion. But GE is not alone: just over half of the Fortune 500 have disappeared since then. To understand the agility imperative, leaders must understand the ‘spin rate’, or speed at which the markets, organizations and their people change and evolve. Challenges occur when these systems move at diﬀerent speeds. In the case of GE, the market is spinning faster than the company can keep up.

If the keyword for the 20th century was ‘speed’, the keyword for the 21st century is ‘agility’, as organizations struggle to learn how to play an ever-evolving game of business on an increasingly accelerating and shifting playing field where speed alone is insuﬃcient to ensure success. Change is not new: we’ve been dealing with it for as long as commerce has existed. But the velocity and scope of change today is very diﬀerent. We can look to mathematics for insight. In calculus, the first derivative of distance is velocity and the second is acceleration. Today’s market environment is experiencing what mathematicians call the third derivative: the rate of the increase in acceleration, or ‘jerk’. According to Visual Capitalist, television ownership took 22 years to reach 50 million customers. Facebook took a mere three to reach the same milestone. Pokémon Go reached 50 Dialogue Q1 2019

million people in 19 days. If the pace of change was recorded by a metronome, its needle would have broken. The flow of goods, information and capital flow around the world is rapidly accelerating. This, coupled with the explosion of new technologies disrupting every industry requires us to move from managing a linear notion of change to an exponential one. Managing at this accelerated speed of business is the first challenge organizations and their leaders must address.

As the former chief executive of Google, Eric Schmidt, notes: “Every two days we create as much information as we had available to us in 2003. More to scan, know, learn. But the real challenge is getting to insights that matter more eﬃciently.” A simple way to think about complexity in this context is that it increases exponentially as you increase the number of variables and connections between the variables in a system. Less than two decades after the introduction of the Mosaic browser, a projected 6.4 billion digitally connected things are in use worldwide, with millions more connecting daily. As people and things become even more interconnected, the complexity will continue to increase at mind-boggling rates.

Plotting strategy is no longer a game of chess. In a linear world, strategy was more straightforward. Companies could predict what might happen in the environment, mobilize resources and respond to the market. If the 20th-century definition of competitive advantage was defined by Michael Porter, the 21st-century

Competing with one hand tied behind your back is never easy. Yet too many organizations focus on the day-to-day, with little investment in innovating for future success. How do companies strike a balance between the exploitation of what they already have and exploring what they could have in future? Freeing your organization from its bonds must come from the top. Fear of failure will extinguish imagination. The innovation within your walls will leave, if untended. Ambidexterity is achievable. Learn to unleash the power of both hands.