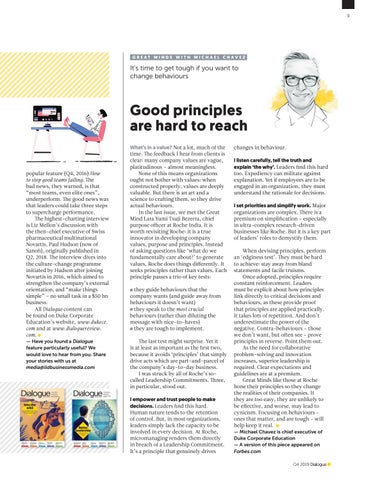 Good principles are hard to reach popular feature (Q4, 2016) How to stop good teams failing. The bad news, they warned, is that “most teams, even elite ones”, underperform. The good news was that leaders could take three steps to supercharge performance. The highest-charting interview is Liz Mellon’s discussion with the then-chief executive of Swiss pharmaceutical multinational Novartis, Paul Hudson (now of Sanofi), originally published in Q2, 2018. The interview dives into the culture-change programme initiated by Hudson after joining Novartis in 2016, which aimed to strengthen the company’s external orientation, and “make things simple” – no small task in a $50 bn business. All Dialogue content can be found on Duke Corporate Education’s website, www.dukece. com and at www.dialoguereview. com. — Have you found a Dialogue feature particularly useful? We would love to hear from you. Share your stories with us at media@lidbusinessmedia.com

What’s in a value? Not a lot, much of the time. The feedback I hear from clients is clear: many company values are vague, platitudinous – almost meaningless. None of this means organizations ought not bother with values: when constructed properly, values are deeply valuable. But there is an art and a science to crafting them, so they drive actual behaviours. In the last issue, we met the Great Mind Lara Yumi Tsuji Bezerra, chief purpose oﬃcer at Roche India. It is worth revisiting Roche: it is a true innovator in developing company values, purpose and principles. Instead of asking questions like ‘what do we fundamentally care about?’ to generate values, Roche does things diﬀerently. It seeks principles rather than values. Each principle passes a trio of key tests: they guide behaviours that the company wants (and guide away from behaviours it doesn’t want) they speak to the most crucial behaviours (rather than diluting the message with nice-to-haves) they are tough to implement. The last test might surprise. Yet it is at least as important as the first two, because it avoids ‘principles’ that simply drive acts which are part-and-parcel of the company’s day-to-day business. I was struck by all of Roche’s socalled Leadership Commitments. Three, in particular, stood out. I empower and trust people to make decisions. Leaders find this hard. Human nature tends to the retention of control. But, in most organizations, leaders simply lack the capacity to be involved in every decision. At Roche, micromanaging renders them directly in breach of a Leadership Commitment. It’s a principle that genuinely drives

changes in behaviour. I listen carefully, tell the truth and explain ‘the why’. Leaders find this hard too. Expediency can militate against explanation. Yet if employees are to be engaged in an organization, they must understand the rationale for decisions. I set priorities and simplify work. Major organizations are complex. There is a premium on simplification – especially in ultra-complex research-driven businesses like Roche. But it is a key part of leaders’ roles to demystify them. When devising principles, perform an ‘edginess test’. They must be hard to achieve: stay away from bland statements and facile truisms. Once adopted, principles require constant reinforcement. Leaders must be explicit about how principles link directly to critical decisions and behaviours, as these provide proof that principles are applied practically. It takes lots of repetition. And don’t underestimate the power of the negative. Contra-behaviours – those we don’t want, but often see – prove principles in reverse. Point them out. As the need for collaborative problem-solving and innovation increases, superior leadership is required. Clear expectations and guidelines are at a premium. Great Minds like those at Roche hone their principles so they change the realities of their companies. If they are too easy, they are unlikely to be eﬀective, and worse, may lead to cynicism. Focusing on behaviours ones that matter, and are tough - will help keep it real. — Michael Chavez is chief executive of Duke Corporate Education — A version of this piece appeared on Forbes.com Q4 2019 Dialogue