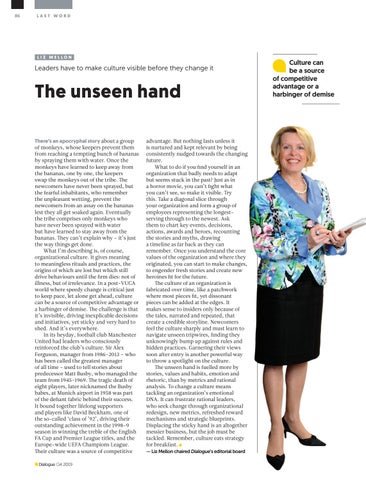 Leaders have to make culture visible before they change it

The unseen hand There’s an apocryphal story about a group of monkeys, whose keepers prevent them from reaching a tempting bunch of bananas by spraying them with water. Once the monkeys have learned to keep away from the bananas, one by one, the keepers swap the monkeys out of the tribe. The newcomers have never been sprayed, but the fearful inhabitants, who remember the unpleasant wetting, prevent the newcomers from an assay on the bananas lest they all get soaked again. Eventually the tribe comprises only monkeys who have never been sprayed with water but have learned to stay away from the bananas. They can’t explain why – it’s just the way things get done. What I’m describing is, of course, organizational culture. It gives meaning to meaningless rituals and practices, the origins of which are lost but which still drive behaviours until the firm dies: not of illness, but of irrelevance. In a post-VUCA world where speedy change is critical just to keep pace, let alone get ahead, culture can be a source of competitive advantage or a harbinger of demise. The challenge is that it’s invisible, driving inexplicable decisions and initiatives, yet sticky and very hard to shed. And it’s everywhere. In its heyday, football club Manchester United had leaders who consciously reinforced the club’s culture. Sir Alex Ferguson, manager from 1986-2013 – who has been called the greatest manager of all time – used to tell stories about predecessor Matt Busby, who managed the team from 1945-1969. The tragic death of eight players, later nicknamed the Busby babes, at Munich airport in 1958 was part of the defiant fabric behind their success. It bound together lifelong supporters and players like David Beckham, one of the so-called ‘class of ’92’, driving their outstanding achievement in the 1998-9 season in winning the treble of the English FA Cup and Premier League titles, and the Europe-wide UEFA Champions League. Their culture was a source of competitive Dialogue Q4 2019

advantage. But nothing lasts unless it is nurtured and kept relevant by being consistently nudged towards the changing future. What to do if you find yourself in an organization that badly needs to adapt but seems stuck in the past? Just as in a horror movie, you can’t fight what you can’t see, so make it visible. Try this. Take a diagonal slice through your organization and form a group of employees representing the longestserving through to the newest. Ask them to chart key events, decisions, actions, awards and heroes, recounting the stories and myths, drawing a timeline as far back as they can remember. Once you understand the core values of the organization and where they originated, you can start to make changes, to engender fresh stories and create new heroines fit for the future. The culture of an organization is fabricated over time, like a patchwork where most pieces fit, yet dissonant pieces can be added at the edges. It makes sense to insiders only because of the tales, narrated and repeated, that create a credible storyline. Newcomers feel the culture sharply and must learn to navigate unseen tripwires, finding they unknowingly bump up against rules and hidden practices. Garnering their views soon after entry is another powerful way to throw a spotlight on the culture. The unseen hand is fuelled more by stories, values and habits, emotion and rhetoric, than by metrics and rational analysis. To change a culture means tackling an organization’s emotional DNA. It can frustrate rational leaders, who seek change through organizational redesign, new metrics, refreshed reward mechanisms and strategic blueprints. Displacing the sticky hand is an altogether messier business, but the job must be tackled. Remember, culture eats strategy for breakfast. — Liz Mellon chaired Dialogue’s editorial board