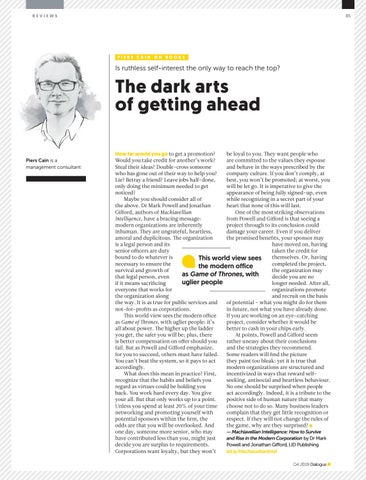 Is ruthless self-interest the only way to reach the top?

How far would you go to get a promotion? be loyal to you. They want people who Would you take credit for another’s work? are committed to the values they espouse Steal their ideas? Double-cross someone and behave in the ways prescribed by the who has gone out of their way to help you? company culture. If you don’t comply, at Lie? Betray a friend? Leave jobs half-done, best, you won’t be promoted; at worst, you only doing the minimum needed to get will be let go. It is imperative to give the noticed? appearance of being fully signed-up, even Maybe you should consider all of while recognizing in a secret part of your the above. Dr Mark Powell and Jonathan heart that none of this will last. Giﬀord, authors of Machiavellian One of the most striking observations Intelligence, have a bracing message: from Powell and Giﬀord is that seeing a modern organizations are inherently project through to its conclusion could inhuman. They are ungrateful, heartless, damage your career. Even if you deliver amoral and duplicitous. The organization the promised benefits, your sponsor may is a legal person and its have moved on, having senior oﬃcers are duty taken the credit for bound to do whatever is themselves. Or, having This world view sees necessary to ensure the completed the project, the modern office survival and growth of the organization may as Game of Thrones, with that legal person, even decide you are no uglier people if it means sacrificing longer needed. After all, everyone that works for organizations promote the organization along and recruit on the basis the way. It is as true for public services and of potential – what you might do for them not-for-profits as corporations. in future, not what you have already done. This world view sees the modern oﬃce If you are working on an eye-catching as Game of Thrones, with uglier people: it’s project, consider whether it would be all about power. The higher up the ladder better to cash in your chips early. you get, the safer you will be; plus, there At points, Powell and Giﬀord seem is better compensation on oﬀer should you rather uneasy about their conclusions fail. But as Powell and Giﬀord emphasize, and the strategies they recommend. for you to succeed, others must have failed. Some readers will find the picture You can’t beat the system, so it pays to act they paint too bleak: yet it is true that accordingly. modern organizations are structured and What does this mean in practice? First, incentivized in ways that reward selfrecognize that the habits and beliefs you seeking, antisocial and heartless behaviour. regard as virtues could be holding you No one should be surprised when people back. You work hard every day. You give act accordingly. Indeed, it is a tribute to the your all. But that only works up to a point. positive side of human nature that many Unless you spend at least 20% of your time choose not to do so. Many business leaders networking and promoting yourself with complain that they get little recognition or potential sponsors within the firm, the respect. If they will not change the rules of odds are that you will be overlooked. And the game, why are they surprised? one day, someone more senior, who may — Machiavellian Intelligence: How to Survive have contributed less than you, might just and Rise in the Modern Corporation by Dr Mark decide you are surplus to requirements. Powell and Jonathan Gifford, LID Publishing Corporations want loyalty, but they won’t bit.ly/MachiavellianIntel Q4 2019 Dialogue