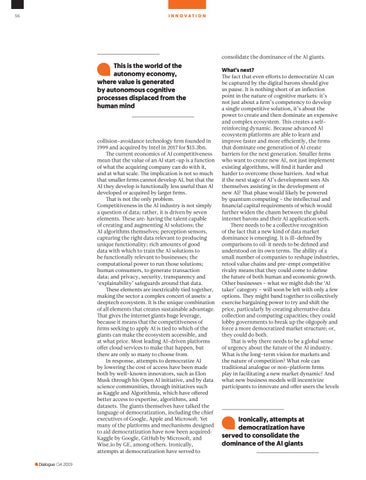 consolidate the dominance of the AI giants.

This is the world of the autonomy economy, where value is generated by autonomous cognitive processes displaced from the human mind

collision-avoidance technology firm founded in 1999 and acquired by Intel in 2017 for $15.3bn. The current economics of AI competitiveness mean that the value of an AI start-up is a function of what the acquiring company can do with it, and at what scale. The implication is not so much that smaller firms cannot develop AI, but that the AI they develop is functionally less useful than AI developed or acquired by larger firms. That is not the only problem. Competitiveness in the AI industry is not simply a question of data; rather, it is driven by seven elements. These are: having the talent capable of creating and augmenting AI solutions; the AI algorithms themselves; perception sensors, capturing the right data relevant to producing unique functionality; rich amounts of good data with which to train the AI solutions to be functionally relevant to businesses; the computational power to run those solutions; human consumers, to generate transaction data; and privacy, security, transparency and ‘explainability’ safeguards around that data. These elements are inextricably tied together, making the sector a complex concert of assets: a deeptech ecosystem. It is the unique combination of all elements that creates sustainable advantage. That gives the internet giants huge leverage, because it means that the competitiveness of firms seeking to apply AI is tied to which of the giants can make the ecosystem accessible, and at what price. Most leading AI-driven platforms oﬀer cloud services to make that happen, but there are only so many to choose from. In response, attempts to democratize AI by lowering the cost of access have been made both by well-known innovators, such as Elon Musk through his Open AI initiative, and by data science communities, through initiatives such as Kaggle and Algorithmia, which have oﬀered better access to expertise, algorithms, and datasets. The giants themselves have talked the language of democratization, including the chief executives of Google, Apple and Microsoft. Yet many of the platforms and mechanisms designed to aid democratization have now been acquired: Kaggle by Google, GitHub by Microsoft, and Wise.io by GE, among others. Ironically, attempts at democratization have served to Dialogue Q4 2019

The fact that even eﬀorts to democratize AI can be captured by the digital barons should give us pause. It is nothing short of an inflection point in the nature of cognitive markets: it’s not just about a firm’s competency to develop a single competitive solution, it’s about the power to create and then dominate an expensive and complex ecosystem. This creates a selfreinforcing dynamic. Because advanced AI ecosystem platforms are able to learn and improve faster and more eﬃciently, the firms that dominate one generation of AI create barriers for the next generation. Smaller firms who want to create new AI, not just implement existing algorithms, will find it harder and harder to overcome those barriers. And what if the next stage of AI’s development sees AIs themselves assisting in the development of new AI? That phase would likely be powered by quantum computing – the intellectual and financial capital requirements of which would further widen the chasm between the global internet barons and their AI application serfs. There needs to be a collective recognition of the fact that a new kind of data market dominance is emerging. It is ill-defined by comparisons to oil: it needs to be defined and understood on its own terms. The ability of a small number of companies to reshape industries, retool value chains and pre-empt competitive rivalry means that they could come to define the future of both human and economic growth. Other businesses – what we might dub the ‘AI taker’ category – will soon be left with only a few options. They might band together to collectively exercise bargaining power to try and shift the price, particularly by creating alternative data collection and computing capacities; they could lobby governments to break up the oligopoly and force a more democratized market structure; or, they could do both. That is why there needs to be a global sense of urgency about the future of the AI industry. What is the long-term vision for markets and the nature of competition? What role can traditional analogue or non-platform firms play in facilitating a new market dynamic? And what new business models will incentivize participants to innovate and oﬀer users the levels

Ironically, attempts at democratization have served to consolidate the dominance of the AI giants