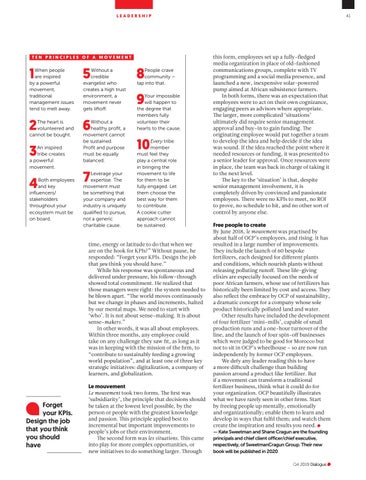 TEN PRINCIPLES OF A MOVEMENT

When people are inspired by a powerful movement, traditional management issues tend to melt away.

The heart is volunteered and cannot be bought.

Both employees and key influencers/ stakeholders throughout your ecosystem must be on board.

Without a credible evangelist who creates a high trust environment, a movement never gets liftoff.

Without a healthy profit, a movement cannot be sustained. Profit and purpose must be equally balanced.

Leverage your expertise. The movement must be something that your company and industry is uniquely qualified to pursue, not a generic charitable cause.

People crave community – tap into that.

Your impossible will happen to the degree that members fully volunteer their hearts to the cause.

Every tribe member must feel they play a central role in bringing the movement to life for them to be fully engaged. Let them choose the best way for them to contribute. A cookie cutter approach cannot be sustained.

time, energy or latitude to do that when we are on the hook for KPIs?” Without pause, he responded: “Forget your KPIs. Design the job that you think you should have.” While his response was spontaneous and delivered under pressure, his follow-through showed total commitment. He realized that those managers were right: the system needed to be blown apart. “The world moves continuously but we change in phases and increments, halted by our mental maps. We need to start with ‘who’. It is not about sense-making. It is about sense-makers.” In other words, it was all about employees. Within three months, any employee could take on any challenge they saw fit, as long as it was in keeping with the mission of the firm, to “contribute to sustainably feeding a growing world population”, and at least one of three key strategic initiatives: digitalization, a company of learners, and globalization.

Forget your KPIs. Design the job that you think you should have

Le mouvement took two forms. The first was ‘subsidiarity’, the principle that decisions should be taken at the lowest level possible, by the person or people with the greatest knowledge and passion. This principle applied best to incremental but important improvements to people’s jobs or their environment. The second form was les situations. This came into play for more complex opportunities, or new initiatives to do something larger. Through

this form, employees set up a fully-fledged media organization in place of old-fashioned communications groups, complete with TV programming and a social media presence, and launched a new, inexpensive solar-powered pump aimed at African subsistence farmers. In both forms, there was an expectation that employees were to act on their own cognizance, engaging peers as advisors where appropriate. The larger, more complicated ‘situations’ ultimately did require senior management approval and buy-in to gain funding. The originating employee would put together a team to develop the idea and help decide if the idea was sound. If the idea reached the point where it needed resources or funding, it was presented to a senior leader for approval. Once resources were in place, the team was back in charge of taking it to the next level. The key to the ‘situation’ is that, despite senior management involvement, it is completely driven by convinced and passionate employees. There were no KPIs to meet, no ROI to prove, no schedule to hit, and no other sort of control by anyone else.

By June 2018, le mouvement was practised by about half of OCP’s employees, and rising. It has resulted in a large number of improvements. They include the launch of 60 bespoke fertilizers, each designed for diﬀerent plants and conditions, which nourish plants without releasing polluting runoﬀ. These life-giving elixirs are especially focused on the needs of poor African farmers, whose use of fertilizers has historically been limited by cost and access. They also reflect the embrace by OCP of sustainability, a dramatic concept for a company whose sole product historically polluted land and water. Other results have included the development of four fertilizer ‘mini-mills’, capable of small production runs and a one-hour turnover of the line, and the launch of four spin-oﬀ businesses which were judged to be good for Morocco but not to sit in OCP’s wheelhouse – so are now run independently by former OCP employees. We defy any leader reading this to have a more diﬃcult challenge than building passion around a product like fertilizer. But if a movement can transform a traditional fertilizer business, think what it could do for your organization. OCP beautifully illustrates what we have rarely seen in other firms. Start by freeing people up mentally, emotionally and organizationally; enable them to learn and develop in ways that fulfil them; and watch them create the inspiration and results you need. — Kate Sweetman and Shane Cragun are the founding principals and chief client officer/chief executive, respectively, of SweetmanCragun Group. Their new book will be published in 2020 Q4 2019 Dialogue