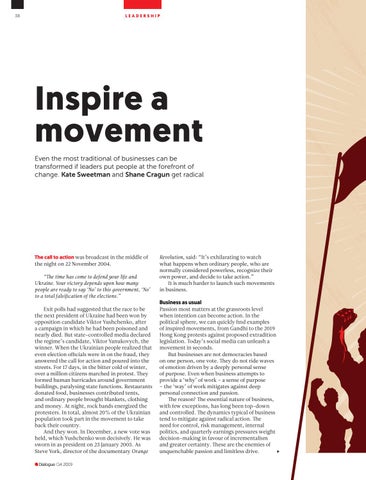 Inspire a movement Even the most traditional of businesses can be transformed if leaders put people at the forefront of change. Kate Sweetman and Shane Cragun get radical

The call to action was broadcast in the middle of the night on 22 November 2004. “The time has come to defend your life and Ukraine. Your victory depends upon how many people are ready to say ‘No’ to this government, ‘No’ to a total falsification of the elections.” Exit polls had suggested that the race to be the next president of Ukraine had been won by opposition candidate Viktor Yushchenko, after a campaign in which he had been poisoned and nearly died. But state-controlled media declared the regime’s candidate, Viktor Yanukovych, the winner. When the Ukrainian people realized that even election oﬃcials were in on the fraud, they answered the call for action and poured into the streets. For 17 days, in the bitter cold of winter, over a million citizens marched in protest. They formed human barricades around government buildings, paralysing state functions. Restaurants donated food, businesses contributed tents, and ordinary people brought blankets, clothing and money. At night, rock bands energized the protesters. In total, almost 20% of the Ukrainian population took part in the movement to take back their country. And they won. In December, a new vote was held, which Yushchenko won decisively. He was sworn in as president on 23 January 2005. As Steve York, director of the documentary Orange Dialogue Q4 2019

Revolution, said: “It’s exhilarating to watch what happens when ordinary people, who are normally considered powerless, recognize their own power, and decide to take action.” It is much harder to launch such movements in business.

Passion most matters at the grassroots level when intention can become action. In the political sphere, we can quickly find examples of inspired movements, from Gandhi to the 2019 Hong Kong protests against proposed extradition legislation. Today’s social media can unleash a movement in seconds. But businesses are not democracies based on one person, one vote. They do not ride waves of emotion driven by a deeply personal sense of purpose. Even when business attempts to provide a ‘why’ of work – a sense of purpose – the ‘way’ of work mitigates against deep personal connection and passion. The reason? The essential nature of business, with few exceptions, has long been top-down and controlled. The dynamics typical of business tend to mitigate against radical action. The need for control, risk management, internal politics, and quarterly earnings pressures weight decision-making in favour of incrementalism and greater certainty. These are the enemies of unquenchable passion and limitless drive.