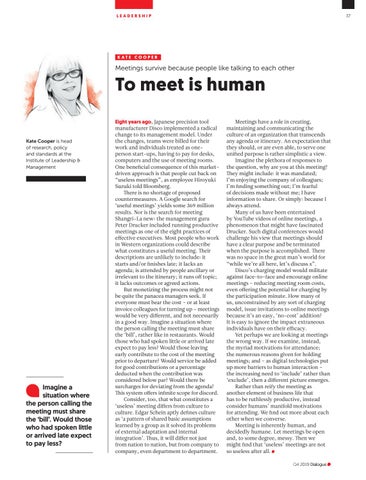 Meetings survive because people like talking to each other

To meet is human Kate Cooper is head of research, policy and standards at the Institute of Leadership & Management

Imagine a situation where the person calling the meeting must share the ‘bill’. Would those who had spoken little or arrived late expect to pay less?

Eight years ago, Japanese precision tool manufacturer Disco implemented a radical change to its management model. Under the changes, teams were billed for their work and individuals treated as oneperson start-ups, having to pay for desks, computers and the use of meeting rooms. One beneficial consequence of this marketdriven approach is that people cut back on “useless meetings”, as employee Hiroyuki Suzuki told Bloomberg. There is no shortage of proposed countermeasures. A Google search for ‘useful meetings’ yields some 369 million results. Nor is the search for meeting Shangri-La new: the management guru Peter Drucker included running productive meetings as one of the eight practices of eﬀective executives. Most people who work in Western organizations could describe what constitutes a useful meeting. Their descriptions are unlikely to include: it starts and/or finishes late; it lacks an agenda; is attended by people ancillary or irrelevant to the itinerary; it runs oﬀ topic; it lacks outcomes or agreed actions. But monetizing the process might not be quite the panacea managers seek. If everyone must bear the cost – or at least invoice colleagues for turning up – meetings would be very diﬀerent, and not necessarily in a good way. Imagine a situation where the person calling the meeting must share the ‘bill’, rather like in restaurants. Would those who had spoken little or arrived late expect to pay less? Would those leaving early contribute to the cost of the meeting prior to departure? Would service be added for good contributions or a percentage deducted when the contribution was considered below par? Would there be surcharges for deviating from the agenda? This system oﬀers infinite scope for discord. Consider, too, that what constitutes a ‘useless’ meeting diﬀers from culture to culture. Edgar Schein aptly defines culture as ‘a pattern of shared basic assumptions learned by a group as it solved its problems of external adaptation and internal integration’. Thus, it will diﬀer not just from nation to nation, but from company to company, even department to department.

Meetings have a role in creating, maintaining and communicating the culture of an organization that transcends any agenda or itinerary. An expectation that they should, or are even able, to serve one unified purpose is rather simplistic a view. Imagine the plethora of responses to the question, why are you at this meeting? They might include: it was mandated; I’m enjoying the company of colleagues; I’m finding something out; I’m fearful of decisions made without me; I have information to share. Or simply: because I always attend. Many of us have been entertained by YouTube videos of online meetings, a phenomenon that might have fascinated Drucker. Such digital conferences would challenge his view that meetings should have a clear purpose and be terminated when the purpose is accomplished. There was no space in the great man’s world for “while we’re all here, let’s discuss x”. Disco’s charging model would militate against face-to-face and encourage online meetings – reducing meeting room costs, even oﬀering the potential for charging by the participation minute. How many of us, unconstrained by any sort of charging model, issue invitations to online meetings because it’s an easy, ‘no-cost’ addition? It is easy to ignore the impact extraneous individuals have on their eﬃcacy. Yet perhaps we are looking at meetings the wrong way. If we examine, instead, the myriad motivations for attendance; the numerous reasons given for holding meetings; and – as digital technologies put up more barriers to human interaction – the increasing need to ‘include’ rather than ‘exclude’, then a diﬀerent picture emerges. Rather than reify the meeting as another element of business life that has to be ruthlessly productive, instead consider humans’ manifold motivations for attending. We find out more about each other when we converse. Meeting is inherently human, and decidedly humane. Let meetings be open and, to some degree, messy. Then we might find that ‘useless’ meetings are not so useless after all. Q4 2019 Dialogue