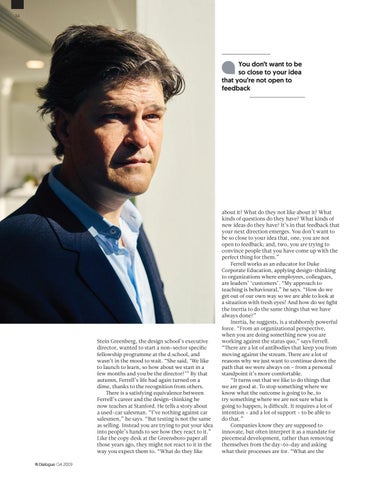 Stein Greenberg, the design school’s executive director, wanted to start a non-sector specific fellowship programme at the d.school, and wasn’t in the mood to wait. “She said, ‘We like to launch to learn, so how about we start in a few months and you be the director?’” By that autumn, Ferrell’s life had again turned on a dime, thanks to the recognition from others. There is a satisfying equivalence between Ferrell’s career and the design-thinking he now teaches at Stanford. He tells a story about a used-car salesman. “I’ve nothing against car salesmen,” he says. “But testing is not the same as selling. Instead you are trying to put your idea into people’s hands to see how they react to it.” Like the copy desk at the Greensboro paper all those years ago, they might not react to it in the way you expect them to. “What do they like Dialogue Q4 2019

about it? What do they not like about it? What kinds of questions do they have? What kinds of new ideas do they have? It’s in that feedback that your next direction emerges. You don’t want to be so close to your idea that, one, you are not open to feedback; and, two, you are trying to convince people that you have come up with the perfect thing for them.” Ferrell works as an educator for Duke Corporate Education, applying design-thinking to organizations where employees, colleagues, are leaders’ ‘customers’. “My approach to teaching is behavioural,” he says. “How do we get out of our own way so we are able to look at a situation with fresh eyes? And how do we fight the inertia to do the same things that we have always done?” Inertia, he suggests, is a stubbornly powerful force. “From an organizational perspective, when you are doing something new you are working against the status quo,” says Ferrell. “There are a lot of antibodies that keep you from moving against the stream. There are a lot of reasons why we just want to continue down the path that we were always on – from a personal standpoint it’s more comfortable. “It turns out that we like to do things that we are good at. To stop something where we know what the outcome is going to be, to try something where we are not sure what is going to happen, is diﬃcult. It requires a lot of intention – and a lot of support – to be able to do that.” Companies know they are supposed to innovate, but often interpret it as a mandate for piecemeal development, rather than removing themselves from the day-to-day and asking what their processes are for. “What are the