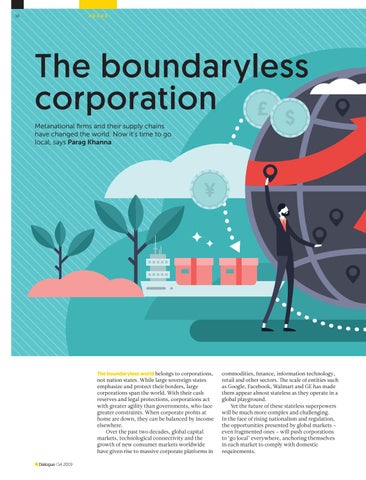 The boundaryless world belongs to corporations, not nation states. While large sovereign states emphasize and protect their borders, large corporations span the world. With their cash reserves and legal protections, corporations act with greater agility than governments, who face greater constraints. When corporate profits at home are down, they can be balanced by income elsewhere. Over the past two decades, global capital markets, technological connectivity and the growth of new consumer markets worldwide have given rise to massive corporate platforms in Dialogue Q4 2019

commodities, finance, information technology, retail and other sectors. The scale of entities such as Google, Facebook, Walmart and GE has made them appear almost stateless as they operate in a global playground. Yet the future of these stateless superpowers will be much more complex and challenging. In the face of rising nationalism and regulation, the opportunities presented by global markets – even fragmented ones – will push corporations to ‘go local’ everywhere, anchoring themselves in each market to comply with domestic requirements.