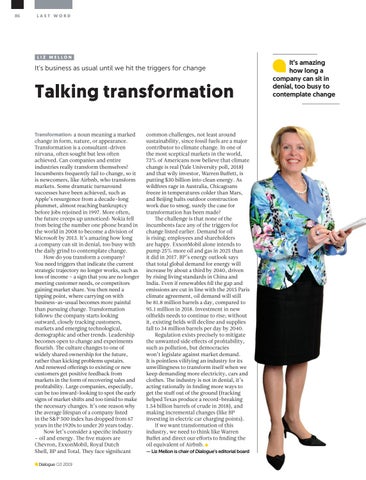 Talking transformation Transformation: a noun meaning a marked change in form, nature, or appearance. Transformation is a consultant-driven nirvana, often sought but less often achieved. Can companies and entire industries really transform themselves? Incumbents frequently fail to change, so it is newcomers, like Airbnb, who transform markets. Some dramatic turnaround successes have been achieved, such as Apple’s resurgence from a decade-long plummet, almost reaching bankruptcy before Jobs rejoined in 1997. More often, the future creeps up unnoticed: Nokia fell from being the number one phone brand in the world in 2008 to become a division of Microsoft by 2013. It’s amazing how long a company can sit in denial, too busy with the daily grind to contemplate change. How do you transform a company? You need triggers that indicate the current strategic trajectory no longer works, such as loss of income – a sign that you are no longer meeting customer needs, or competitors gaining market share. You then need a tipping point, where carrying on with business-as-usual becomes more painful than pursuing change. Transformation follows: the company starts looking outward, closely tracking customers, markets and emerging technological, demographic and other trends. Leadership becomes open to change and experiments flourish. The culture changes to one of widely shared ownership for the future, rather than kicking problems upstairs. And renewed oﬀerings to existing or new customers get positive feedback from markets in the form of recovering sales and profitability. Large companies, especially, can be too inward-looking to spot the early signs of market shifts and too timid to make the necessary changes. It’s one reason why the average lifespan of a company listed in the S&amp;P 500 index has dropped from 67 years in the 1920s to under 20 years today. Now let’s consider a specific industry – oil and energy. The five majors are Chevron, ExxonMobil, Royal Dutch Shell, BP and Total. They face significant Dialogue Q3 2019

common challenges, not least around sustainability, since fossil fuels are a major contributor to climate change. In one of the most sceptical markets in the world, 73% of Americans now believe that climate change is real (Yale University poll, 2018) and that wily investor, Warren Buﬀett, is putting $30 billion into clean energy. As wildfires rage in Australia, Chicagoans freeze in temperatures colder than Mars, and Beijing halts outdoor construction work due to smog, surely the case for transformation has been made? The challenge is that none of the incumbents face any of the triggers for change listed earlier. Demand for oil is rising; employees and shareholders are happy. ExxonMobil alone intends to pump 25% more oil and gas in 2025 than it did in 2017. BP’s energy outlook says that total global demand for energy will increase by about a third by 2040, driven by rising living standards in China and India. Even if renewables fill the gap and emissions are cut in line with the 2015 Paris climate agreement, oil demand will still be 81.8 million barrels a day, compared to 95.1 million in 2018. Investment in new oilfields needs to continue to rise; without it, existing fields will decline and supplies fall to 34 million barrels per day by 2040. Regulation exists precisely to mitigate the unwanted side eﬀects of profitability, such as pollution, but democracies won’t legislate against market demand. It is pointless vilifying an industry for its unwillingness to transform itself when we keep demanding more electricity, cars and clothes. The industry is not in denial, it’s acting rationally in finding more ways to get the stuﬀ out of the ground (fracking helped Texas produce a record-breaking 1.54 billion barrels of crude in 2018), and making incremental changes (like BP investing in electric car charging points). If we want transformation of this industry, we need to think like Warren Buﬀet and direct our eﬀorts to finding the oil equivalent of Airbnb. — Liz Mellon is chair of Dialogue’s editorial board

It’s amazing how long a company can sit in denial, too busy to contemplate change

In the decade since the Great Recession, the role of business in society has been a topic of constant debate. In a world defined by social, political and environmental change, we ask: can leader combine a social conscience with the fundamental drive of business to create wealth? How do leaders harness the power of purpose? Can business be a true source of sustainability, or must it fall to the state to deliver what the planet plainly needs? And, is it possible to measure the impact of good leadership?