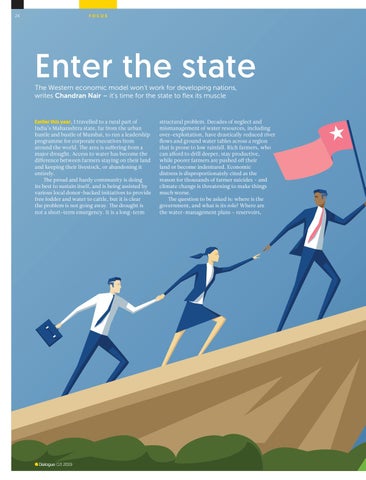 Earlier this year, I travelled to a rural part of India’s Maharashtra state, far from the urban hustle and bustle of Mumbai, to run a leadership programme for corporate executives from around the world. The area is suﬀering from a major drought. Access to water has become the diﬀerence between farmers staying on their land and keeping their livestock, or abandoning it entirely. The proud and hardy community is doing its best to sustain itself, and is being assisted by various local donor-backed initiatives to provide free fodder and water to cattle, but it is clear the problem is not going away. The drought is not a short-term emergency. It is a long-term

structural problem. Decades of neglect and mismanagement of water resources, including over-exploitation, have drastically reduced river flows and ground water tables across a region that is prone to low rainfall. Rich farmers, who can aﬀord to drill deeper, stay productive, while poorer farmers are pushed oﬀ their land or become indentured. Economic distress is disproportionately cited as the reason for thousands of farmer suicides – and climate change is threatening to make things much worse. The question to be asked is: where is the government, and what is its role? Where are the water-management plans – reservoirs,

In the decade since the Great Recession, the role of business in society has been a topic of constant debate. In a world defined by social,...

In the decade since the Great Recession, the role of business in society has been a topic of constant debate. In a world defined by social,...