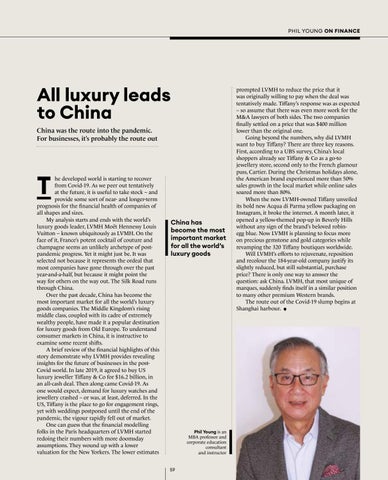 All luxury leads to China China was the route into the pandemic. For businesses, it’s probably the route out

he developed world is starting to recover from Covid-19. As we peer out tentatively at the future, it is useful to take stock – and provide some sort of near- and longer-term prognosis for the financial health of companies of all shapes and sizes. My analysis starts and ends with the world’s luxury goods leader, LVMH Moët Hennessy Louis Vuitton – known ubiquitously as LVMH. On the face of it, France’s potent cocktail of couture and champagne seems an unlikely archetype of postpandemic progress. Yet it might just be. It was selected not because it represents the ordeal that most companies have gone through over the past year-and-a-half, but because it might point the way for others on the way out. The Silk Road runs through China. Over the past decade, China has become the most important market for all the world’s luxury goods companies. The Middle Kingdom’s rising middle class, coupled with its cadre of extremely wealthy people, have made it a popular destination for luxury goods from Old Europe. To understand consumer markets in China, it is instructive to examine some recent shifts. A brief review of the financial highlights of this story demonstrate why LVMH provides revealing insights for the future of businesses in the postCovid world. In late 2019, it agreed to buy US luxury jeweller Tiffany &amp; Co for $16.2 billion, in an all-cash deal. Then along came Covid-19. As one would expect, demand for luxury watches and jewellery crashed – or was, at least, deferred. In the US, Tiffany is the place to go for engagement rings, yet with weddings postponed until the end of the pandemic, the vigour rapidly fell out of market. One can guess that the financial modelling folks in the Paris headquarters of LVMH started redoing their numbers with more doomsday assumptions. They wound up with a lower valuation for the New Yorkers. The lower estimates

prompted LVMH to reduce the price that it was originally willing to pay when the deal was tentatively made. Tiffany’s response was as expected – so assume that there was even more work for the M&amp;A lawyers of both sides. The two companies finally settled on a price that was $400 million lower than the original one. Going beyond the numbers, why did LVMH want to buy Tiffany? There are three key reasons. First, according to a UBS survey, China’s local shoppers already see Tiffany &amp; Co as a go-to jewellery store, second only to the French glamour puss, Cartier. During the Christmas holidays alone, the American brand experienced more than 50% sales growth in the local market while online sales soared more than 80%. When the now LVMH-owned Tiffany unveiled its bold new Acqua di Parma yellow packaging on Instagram, it broke the internet. A month later, it opened a yellow-themed pop-up in Beverly Hills without any sign of the brand’s beloved robinegg blue. Now LVMH is planning to focus more on precious gemstone and gold categories while revamping the 320 Tiffany boutiques worldwide. Will LVMH’s efforts to rejuvenate, reposition and recolour the 184-year-old company justify its slightly reduced, but still substantial, purchase price? There is only one way to answer the question: ask China. LVMH, that most unique of marques, suddenly finds itself in a similar position to many other premium Western brands. The route out of the Covid-19 slump begins at Shanghai harbour.