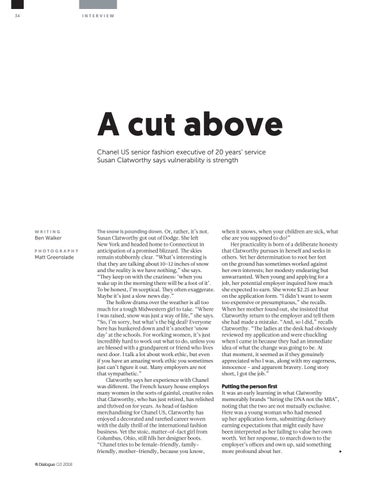 The snow is pounding down. Or, rather, it’s not. Susan Clatworthy got out of Dodge. She left New York and headed home to Connecticut in anticipation of a promised blizzard. The skies remain stubbornly clear. “What’s interesting is that they are talking about 10-12 inches of snow and the reality is we have nothing,” she says. “They keep on with the craziness: ‘when you wake up in the morning there will be a foot of it’. To be honest, I’m sceptical. They often exaggerate. Maybe it’s just a slow news day.” The hollow drama over the weather is all too much for a tough Midwestern girl to take. “Where I was raised, snow was just a way of life,” she says. “So, I’m sorry, but what’s the big deal? Everyone here has hunkered down and it’s another ‘snow day’ at the schools. For working women, it’s just incredibly hard to work out what to do, unless you are blessed with a grandparent or friend who lives next door. I talk a lot about work ethic, but even if you have an amazing work ethic you sometimes just can’t figure it out. Many employers are not that sympathetic.” Clatworthy says her experience with Chanel was diﬀerent. The French luxury house employs many women in the sorts of gainful, creative roles that Clatworthy, who has just retired, has relished and thrived on for years. As head of fashion merchandising for Chanel US, Clatworthy has enjoyed a decorated and rarefied career woven with the daily thrill of the international fashion business. Yet the stoic, matter-of-fact girl from Columbus, Ohio, still fills her designer boots. “Chanel tries to be female-friendly, familyfriendly, mother-friendly, because you know,

when it snows, when your children are sick, what else are you supposed to do?” Her practicality is born of a deliberate honesty that Clatworthy pursues in herself and seeks in others. Yet her determination to root her feet on the ground has sometimes worked against her own interests; her modesty endearing but unwarranted. When young and applying for a job, her potential employer inquired how much she expected to earn. She wrote $2.25 an hour on the application form. “I didn’t want to seem too expensive or presumptuous,” she recalls. When her mother found out, she insisted that Clatworthy return to the employer and tell them she had made a mistake. “And, so I did,” recalls Clatworthy. “The ladies at the desk had obviously reviewed my application and were chuckling when I came in because they had an immediate idea of what the change was going to be. At that moment, it seemed as if they genuinely appreciated who I was, along with my eagerness, innocence – and apparent bravery. Long story short, I got the job.”

It was an early learning in what Clatworthy memorably brands “hiring the DNA not the MBA”, noting that the two are not mutually exclusive. Here was a young woman who had messed up her application form, submitting derisory earning expectations that might easily have been interpreted as her failing to value her own worth. Yet her response, to march down to the employer’s oﬃces and own up, said something more profound about her.