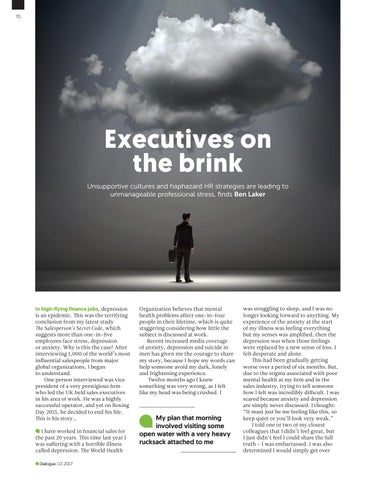 In high-flying finance jobs, depression is an epidemic. This was the terrifying conclusion from my latest study The Salesperson’s Secret Code, which suggests more than one-in-five employees face stress, depression or anxiety. Why is this the case? After interviewing 1,000 of the world’s most influential salespeople from major global organizations, I began to understand. One person interviewed was vice president of a very prestigious firm who led the UK field sales executives in his area of work. He was a highly successful operator, and yet on Boxing Day 2015, he decided to end his life. This is his story… I have worked in financial sales for the past 20 years. This time last year I was suffering with a horrible illness called depression. The World Health

Organization believes that mental health problems affect one-in-four people in their lifetime, which is quite staggering considering how little the subject is discussed at work. Recent increased media coverage of anxiety, depression and suicide in men has given me the courage to share my story, because I hope my words can help someone avoid my dark, lonely and frightening experience. Twelve months ago I knew something was very wrong, as I felt like my head was being crushed. I

was struggling to sleep, and I was no longer looking forward to anything. My experience of the anxiety at the start of my illness was feeling everything but my senses was amplified, then the depression was when those feelings were replaced by a new sense of loss. I felt desperate and alone. This had been gradually getting worse over a period of six months. But, due to the stigma associated with poor mental health at my firm and in the sales industry, trying to tell someone how I felt was incredibly difficult. I was scared because anxiety and depression are simply never discussed. I thought: “It must just be me feeling like this, so keep quiet or you’ll look very weak.” I told one or two of my closest colleagues that I didn’t feel great, but I just didn’t feel I could share the full truth – I was embarrassed. I was also determined I would simply get over